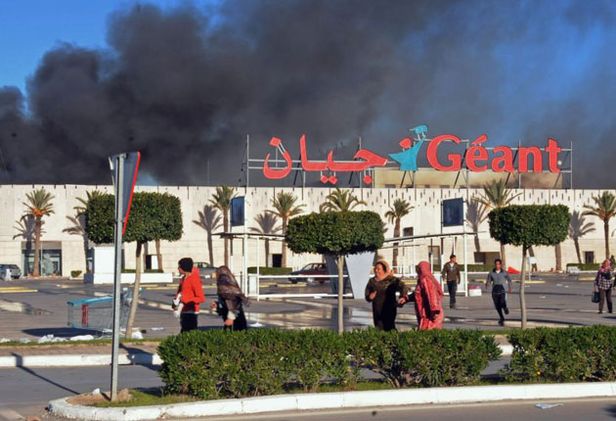 A supermarket is on fire after it was sacked and looted in Bizerte, Tunisia

Rioters burned the Tunisian capital’s main train station to the ground and sacked and looted shops in a wave of unrest after the North African nation’s president was forced from power by protesters.

The departure of President Zine El Abidine Ben Ali after 23 years of iron-fisted rule — demanded by protesters — appeared not to be enough to quell the unrest over soaring unemployment and corruption that has swept Tunisia for nearly a month.

An Associated Press photographer saw soldiers intervening this morning to try to stop looters from sacking a huge supermarket in the Ariana area, 20 miles north of the capital.

A helicopter circled low over the capital, apparently acting as a spotter for fires or pillaging. Gunfire was heard crackling anew in the mid-morning.

The country’s interim leader, former Prime Minister Mohammed Ghannouchi, called in to TV stations overnight to say he had ordered the army and other security forces to intervene immediately in those neighborhoods.

The palace of Saudi King Abdullah confirmed that the ousted president and his family had landed in Saudi Arabia, saying that the kingdom welcomed him with a wish for “peace and security to return to the people of Tunisia.”

There has been no official announcement about Ben Ali’s precise whereabouts in Saudi Arabia, but a source inside the kingdom said he was in the small city of Abha, about 310 miles south of Jeddah. The source said Ben Ali had been taken there to avoid sparking any possible demonstrations by Tunisians living in the larger, seaside city of Jeddah.

He spoke on condition of anonymity because of the sensitivity of the matter.

The ouster followed the country’s largest protests in generations and weeks of escalating unrest, sparked by one man’s suicide and fueled by social media, cell phones and young people who have seen relatively little benefit from Tunisia’s recent economic growth. Thousands of demonstrators from all walks of life rejected Ben Ali’s promises of change and mobbed Tunis, the capital, to demand that he leave.

The government said at least 23 people have been killed in the riots, but opposition members put the death toll at more than three times that.