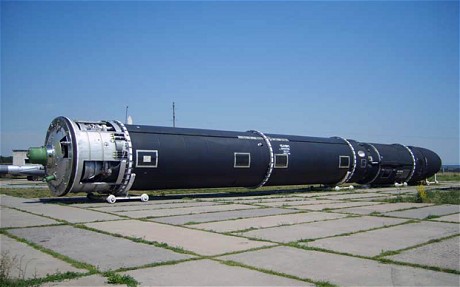 Russia is developing the new missile despite recently negotiating a new landmark Strategic Arms Reduction Treaty with the United States which will see both countries make deep cuts in their nuclear arsenals in the years ahead.

The new missile will replace the ageing Soviet-era SS-18 intercontinental ballistic missile whose terrifying nuclear payload prompted Nato to nickname it ‘Satan’. Russia is estimated to have anything from fifty nine to eighty-eight SS-18 missile silo launchers spread across the country. They are capable of withstanding anything except a direct hit from a nuclear weapon.

The commander of Russia’s Strategic Rocket Forces recently told reporters that the destructive power of just one SS-18 Satan missile was up to 500 times greater than that of the atomic bombs America used against Japan in 1945.

Armed with ten nuclear warheads and with a range of up to almost 10,000 miles, experts say it is the deadliest and the heaviest ballistic missile in the world.

But with the silo-based missile reaching the end of its life, experts say Russia is keen to develop a convincing replacement to keep its nuclear deterrent up to date even though it has other types of ICBMs already in service.

The move comes as Russia pushes ahead with the biggest overhaul of its armed forces since the fall of the Soviet Union. Vladimir Putin, the prime minister, said the Kremlin planned to spend twenty trillion roubles (£420 billion) on the task in the next decade.