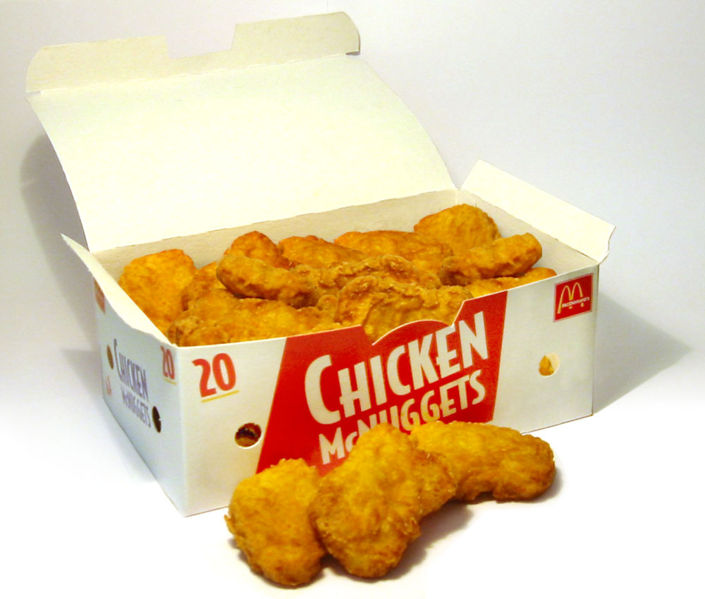 Do you put dimethylpolysiloxane, an anti-foaming agent made of silicone, in your chicken dishes? How about tertiary butylhydroquinone (TBHQ), a chemical preservative so deadly just five grams can kill you?

These are just two of the ingredients in a McDonald’s Chicken McNugget. Only 50 percent of a McNugget is actually chicken. The other half includes corn derivatives, sugars, leavening agents and completely synthetic ingredients.

There’s no doubt processed food like that from McDonald’s is not part of a healthful diet, and I’m grateful I’ve never had a chicken McNugget. But many Americans cannot say the same.

This sentiment was echoed by Federal Judge Robert Sweet in a lawsuit against the restaurant chain in 2003: “Chicken McNuggets, rather than being merely chicken fried in a pan, are a McFrankenstein creation of various elements not utilized by the home cook.”

If you missed Morgan Spurlock’s documentary “Super-Size Me,” I highly recommend you watch this real-life illustration of just how dangerous an excessive fast food diet can be. And excessive is likely far less than you imagine: Eating fast food just twice a week doubles your risk of developing insulin resistance, compared to eating it only once a week. (Insulin resistance one of the primary driving factors behind most Western diseases, from diabetes to cancer to heart disease.)

The truth is, McDonald’s fare contains non-food ingredients that can seriously harm your health. This shouldn’t come as any great surprise. After all, how healthful can something be that shows no signs of decomposing after being left on a counter for more than a decade?

According to McDonald’s, their chicken nuggets are “made with white meat, wrapped up in a crisp tempura batter.” But as Organic Authority pointed out in a recent article, these nuggets are a far cry from what you might expect.

So what are dimethyl polysiloxane and tertiary butylhydroquinone?

TBHQ, typically listed as an “antioxidant,” is a synthetic chemical with antioxidant properties — not a natural antioxidant.

At its 19th and 21st meetings, the Joint FAO/WHO Expert Committee on Food Additives determined that TBHQ was safe for human consumption at levels of 0-0.5 mg/kg of body weight. However, the Codex commission later reset the limits to between 100 and 400 mg/kg, depending on the food it’s in. That’s quite a discrepancy in supposedly “safe” limits! (Chewing gum contains the highest levels of TBHQ.) So is the safe level zero or 400 mg/kg? Who knows?

According to A Consumer’s Dictionary of Food Additives, one gram of TBHQ can cause:

Based on animal studies, health hazards associated with TBHQ include:

The good news is it’s not suspected to be a persistent toxin, meaning your body is probably able to eliminate it so it doesn’t bio-accumulate.

I recently commented on how McDonald’s food seems to remain impervious to degradation, as if it’s been embalmed to stay fresh forever! After sitting on a shelf for 14 years, the hamburger bun has yet to develop a single trace of mold or even shrivel.

If you read the list of ingredients in these buns, this mysterious mummification becomes less of a mystery:

That these foods don’t decompose is a clear sign that they aren’t real foods, and should not be part of your diet. (Always remember that wholesome, health-promoting food is “live” food, and the hallmark of live food is that it will decompose.)

The bottom line is, if you want to stay healthy, and keep your children healthy, it is best to avoid both fast food and other processed foods, and invest time in cooking from scratch.

Ideally, you’ll want to consume as much whole, raw, organic and/or locally grown foods as possible. That’s why so many people like vegetable juicing. You’re consuming living raw food!

Most vegetables also have very low carbohydrate levels that minimally disturb insulin metabolism — another important trait of a healthful diet.

I also believe optimal health is largely dependent on eating the right foods for your nutritional type. To find out your type, visit my Nutritional Typing test.

If you’re hooked on fast food and other processed foods, please review my recent article “How to Wean Yourself Off Processed Foods in 7 Steps.”

And if you have children, remember that home-cooked meals can have far reaching benefits, even to your future grandchildren. It’s now well known that dietary changes can prompt epigenetic DNA changes that can be passed on to future generations.

If you need help determining what foods are healthful, please review the shopping guidelines listed at the end of this recent article.