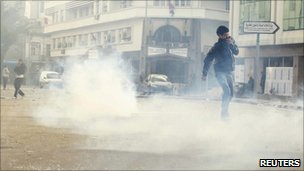 Tunisian President Zine al-Abidine Ben Ali has fled with his family to Saudi Arabia, after being forced from office after 23 years in power.

The 74-year-old leader conceded power after protests over economic issues escalated into rallies against him.

Prime Minister Mohammed Ghannouchi has taken over as interim president, and a state of emergency has been declared.

Mr Ghannouchi has said he will meet political leaders on Saturday in an attempt to form a government.

Dozens of people have died in recent weeks as unrest has swept the country and security forces have cracked down on demonstrations over unemployment, food price rises and corruption.

– Tunisia Gets Its Third President in One Week (New York Magazine):

Fouad Mebazaa was sworn in as Tunisia’s acting leader today after the country’s longtime authoritarian president, Zine El Abidine Ben Ali, and his family took refuge in Saudi Arabia, the result of angry street protests against the government. It marks the second time power in Tunisia has changed hands over the past twenty-four hours: The prime minister had announced just a day before that he was taking power from Ali, but he abruptly gave it up this morning. Complying with the rules of succession, the prime minister turned over authority to Mebazza, speaker of the Tunisian Parliament, who is expected to hold elections to form a new government within 60 days. Acting president Mebazaa said:

“Citizens, sons and daughters of our country of Tunis, in this important and urgent moment in the history of our beloved country, I appeal to all of you of various political parties, and nationalist organizations, and all civil society organizations to fight for the national interest and to respect the army’s command and the national security in security matters, and to preserve private and public property and to bring the return of peace and security in the hearts of the citizens.”

Meanwhile, gunshots are still being heard in the Tunisian capital. Nearly fifty people have been reported dead as a result of rioting at two Tunisian prisons. Soldiers, police officers and young men with guns are trying to keep the streets of downtown Tunis under lockdown. According to the Times, “Clouds of smoke from the burning and looting of a major supermarket hung over the bleached city skyline. Residents huddled in their homes for fear of the police.” The protests began following the self-immolation last month of a college-educated street vendor in the remote town of Sidi Bouzid who was frustrated by the lack of job prospects, and grew from grass roots through social networks like Facebook and Twitter.