And the explanations get better and better.

All the birds falling out of the sky had clear signs of trauma too. 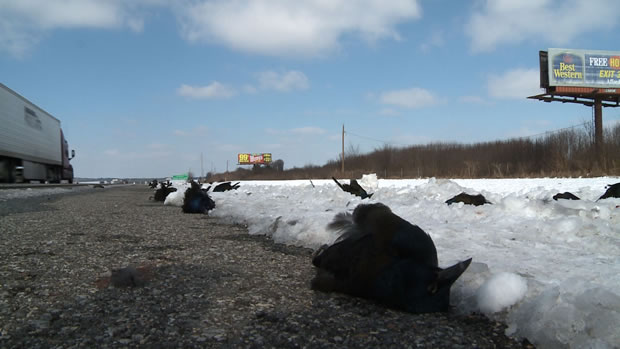 ATHENS, AL — Wednesday morning, we got a handful of emails and phone calls from viewers who said there appeared to be a massive bird kill on the side of Interstate 65 in Limestone County. That’s exactly what we found when we got there.

Just south of Athens, near mile marker 347, there were around 300 dead blackbirds just off the side of the northbound lanes.

The viewers who called us said the birds seemed to just fall from the sky, but we spoke to a wildlife biologist at the scene who says there is an explanation for what happened.

“What it appears to us right now is that the birds were feeding alongside the road,” said Mitchell Marks. “The flock flushed, flew out into a vehicle and we’ve got this kill here along the road.”

All of the dead birds had clear signs of trauma, but Marks collected a few to examine them.