In 2007 the criminal German government did this:

Hundreds limits for pesticides in fruit and vegetables has increased, the Federal Ministry of Food, Agriculture and Consumer Protection (BMELV) between 2004 and 2006. That means fruit and vegetables that is quite legal, more poison on your plate. According to a new study commissioned by Greenpeace, the increases are substantial – on average, the officers, the limits increased by 33 times. Especially with known pesticide-runners with the most violations, such as table grapes, salads, herbs and berries, the Ministry raised the limits on the most, each by more than 500 times.

“It ‘s unbelievable. The consumer protection from the Ministry consistently the opposite of what would be necessary to protect the health of consumers and the environment, ” said Manfred Krautter, chemistry expert at Greenpeace. “Minister Seehofer must stop this practice immediately. We do not need to legalize more and more poison in the food, but effective controls to ensure that contaminated food from the market.”

And the German government couldn’t care less (from the article below):

“Consumer protection pressure group Foodwatch said Monday its own tests of a contaminated sample was 164 times over the legally tolerated dioxin level.

The group concluded the dioxin came from pesticide use on crops that were later used to produce the fat and urged the government to force livestock feed producers to probe all their ingredients for excessive dioxin levels.

She did not even say a word that they will look into Foodwatch’s report.

All governments know the studies that show that pesticides are a cause of Alzheimer’s, MS, cancer etc. They know this.

And people call us fanatics, because we are only eating organic food. 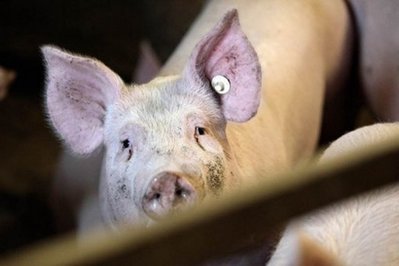 Germany has said that the number of farms banned from selling due to fears of dioxin poisoning would fall sharply in the coming days, as the government looked to ensure no repeat of the scare.(AFP//DPA/File/Bodo Marks)

Agriculture Minister Ilse Aigner said officials were working nonstop to find out who and what had contaminated the feed sent to thousands of farms and vowed tough legal action against those responsible.

“The damage that has been done is immense,” she told reporters after a meeting with feed producers. “There must and will be consequences in this case.”

She said companies should be banned from producing both industrial fats and fats used for livestock, to avoid the possibility that industrial fats could end up being in animal feed.

Aigner said her ministry was in talks with the European Union on better controls and monitoring and she was confident they could “find a common European solution.”

Authorities are investigating the German firm Harles & Jentzsch GmbH, which had produced fat used in the tainted feed pellets. Samples of the fat contained more than 70 times the approved amount of dioxin, according to tests published Saturday by the Schleswig-Holstein state agriculture ministry.

The scandal broke last week when German investigators found excessive levels of dioxin in eggs and some chicken. Authorities then froze sales of poultry, pork and eggs from some 4,700 farms as a precaution.

As of Monday, over 3,050 farms had been reopened after being inspected, but 1,635 remained closed. Slovakia also lifted a ban on German farm products.

Aigner said while the tainted products posed no direct health risk to humans, she had told feed producers Monday that “they actively need to contribute to finding the causes for the contamination and come up with concrete ideas on how to avoid cases like this.”

Dioxins are contaminants that often result from industrial combustion, and exposure to them at high levels is linked to an increased incidence of cancer.

In addition to Slovakia, South Korea banned the sale of some German farm products, and supermarkets in Britain withdrew quiches and cakes made with German eggs from their shelves.

Consumer protection pressure group Foodwatch said Monday its own tests of a contaminated sample was 164 times over the legally tolerated dioxin level.

The group concluded the dioxin came from pesticide use on crops that were later used to produce the fat and urged the government to force livestock feed producers to probe all their ingredients for excessive dioxin levels.