American and German intelligences services knew where Adolf Eichmann – the logistical mastermind of the Nazi Holocaust – was hiding almost a decade before he was kidnapped and brought to trial, documents being released in Munich show. 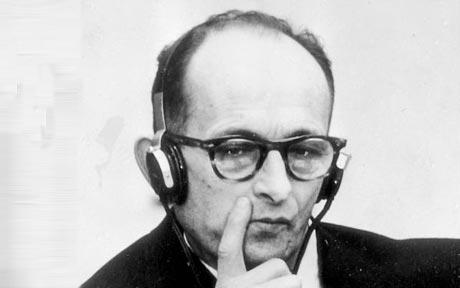 Adolph Eichmann during his trial in 1961

Critics believe the inaction on the part of both countries was to protect both German officials and pro-Nazi clergy in the Vatican who helped him escape.

The newspaper Bild reported on Saturday that it had gained access to some of the files of the BND intelligence service showing it knew where Eichmann was hiding under an alias in Argentina as early as 1952.

It was not until 1960 that an Israeli Mossad commando squad kidnapped him and flew him to Israel to stand trial for his war crimes. Eichmann was hanged in Israel in 1962.

“SS Colonel Eichmann is not to be found in Egypt but is residing in Argentina under the fake name Clemens. E’s address is known to the editor of the German newspaper Der Weg in Argentina,” it says on an index card dated 1952 and reproduced in Bild. The BND also told America about Eichmann’s whereabouts in 1958.

Bild said it had forced the release of the documents following a recent court case in which the BND was ordered to release some information.

3 thoughts on “BND Files: Germany And US Knew Where Adolf Eichmann – The Logistical Mastermind of The Nazi Holocaust – Was Hiding”