South Korea said on Friday it had culled over one million animals, mainly pigs and cattle, to contain foot-and-mouth outbreaks that are threatening to keep pushing up prices of beef and pork in Asia’s No. 4 economy. 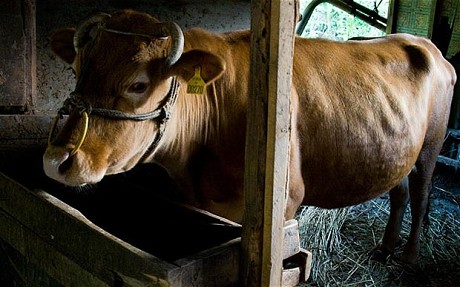 South Korea have killed 1.1 million animals or about eight per cent of the total number of pigs and cattle in the country Photo: ALAMY

A net importer of beef, pork and chicken, South Korea is also fighting against rising cases of bird flu.

Hundreds of thousands of authorities have been working day and night to slaughter the animals, and vaccinating more than 1.2 million animals, mostly cattle, the agriculture ministry said in a statement.

The outbreaks since last November have led prices of beef and pork to climb in South Korea and might lead to more imports of beef from the United States, Australia and New Zealand.

“Beef supply is getting instable as slaughter places are shut down and transferring animals are blocked due to foot-and-mouth disease,” a separate statement from the ministry said.

“Beef prices are expected to continue rising through a high-demand season of Chinese New Year holidays,” it added, referring to the country’s biggest holidays from Feb. 2 to 6.

Retail prices of beef and pork on Thursday soared 10 and 11 per cent respectively from Wednesday, the ministry said.

South Korean president Lee Myung-bak on Thursday called an emergency cabinet meeting against foot-and-mouth, which affects livestock including sheep, cows and pigs. The disease and meat from infected animals, however, are not harmful to humans.

“We should prepare fundamental measures on top of the quarantines, as travellers are increasing and adjacent China and Vietnam have the disease every year,” Mr Lee said on Thursday.

South Korea as of Friday confirmed 95 cases of 134 foot-and-mouth suspected reports in six provinces. It has killed 1.1 million animals, or about eight per cent of the total number of pigs and cattle in the country, the ministry said.

The nationwide outbreaks, originated in pigs in the city of Andong in North Gyeongsang province on Nov. 28, have prompted all livestock markets to be closed, according to the ministry. Some zoos have also been shut down, local media said.