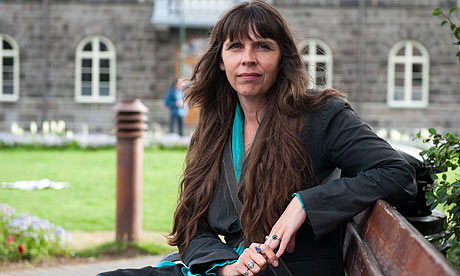 Birgitta Jonsdottir, the Icelandic MP and former WikiLeaks volunteer, who is now fighting a US justice department attempt to get hold of her private messages on Twitter Photograph: Halldor Kolbeins/AFP/Getty Images

A member of parliament in Iceland who is also a former WikiLeaks volunteer says the US justice department has ordered Twitter to hand over her private messages.

Birgitta Jonsdottir, an MP for the Movement in Iceland, said last night on Twitter that the “USA government wants to know about all my tweets and more since november 1st 2009. Do they realize I am a member of parliament in Iceland?”

She said she was starting a legal fight to stop the US getting hold of her messages, after being told by Twitter that a subpoena had been issued. She wrote: “department of justice are requesting twitter to provide the info – I got 10 days to stop it via legal process before twitter hands it over.”

She said the justice department was “just sending a message and of course they are asking for a lot more than just my tweets.”

Jonsdottir said she was demanding a meeting with the US ambassador to Iceland. “The justice department has gone completely over the top.” She added that the US authorities had requested personal information from Twitter as well as her private messages and that she was now assessing her legal position.

“It’s not just about my information. It’s a warning for anyone who had anything to do with WikiLeaks. It is completely unacceptable for the US justice department to flex its muscles like this. I am lucky, I’m a representative in parliament. But what of other people? It’s my duty to do whatever I can to stop this abuse.”

Twitter would not comment on the case. In a statement, the company said: “We’re not going to comment on specific requests, but, to help users protect their rights, it’s our policy to notify users about law enforcement and governmental requests for their information, unless we are prevented by law from doing so.”

Most of Twitter’s messages are public, but users can also send private messages on the service.

Marc Rotenberg, president of the online watchdog the Electronic Privacy Information Centre (EPIC) in Washington, said it appeared the US justice department was looking at building a case against WikiLeaks and its founder, Julian Assange, over its publication of secret US documents.

EPIC has already requested that the US authorities hand over information about their investigations into people who have donated to WikiLeaks via Mastercard, Visa or PayPal.

“The government has the right to get information, but that has to be done in a lawful way. Is there a lawful prosecution that could be brought against WikiLeaks? It seems unlikely to me. But it’s a huge question here in the US,” said Rotenberg.

Jonsdottir was involved in WikiLeaks’ release last year of a video which showed a US military helicopter shooting two Reuters reporters in Iraq. US authorities believe the video was leaked by Private Bradley Manning.

Adrian Lamo, the hacker who reported Manning to the authorities, indicated that Manning first contacted WikiLeaks in late November 2009 – a period covered by the request for Jonsdottir’s tweet history.

In 2009 Jonsdottir invited Assange to a party at the US embassy in Reykjavik where he chatted with the ambassador to Iceland. WikiLeaks had recently published a secret report on the collapse of the country’s banks.

“I said it would be a bit of a prank to take him and see if they knew who he was. I don’t think they had any idea,” Jonsdottir said last year.

The MP has distanced herself from Assange and WikiLeaks, saying he should take a step back to deal with an investigation in Sweden. The 39-year-old is fighting extradition to the country, where two women have accused him of sexual misconduct. He denies the allegations.

In Iceland she has championed the Icelandic Modern Media Initiative which is aimed at creating legislation to make Iceland a legal haven for journalists and media outlets.

She is not the first WikiLeaks associate to be targeted by US officials. Last July Jacob Appelbaum, one of Assange’s closest colleagues, was interrogated for three hours and had his phones confiscated upon entering the country at Newark airport. Customs officials photocopied receipts and searched his laptop.