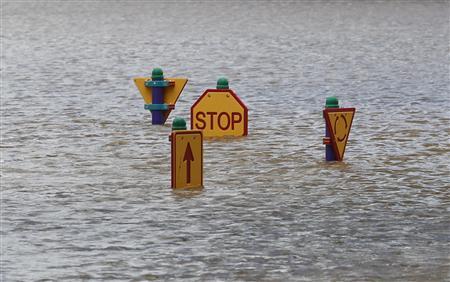 SYDNEY (Reuters) – Floods that have inundated 22 Australian towns and forced more than 200,000 from their homes headed towards the northeast coast on New Year’s Day, forcing further evacuations and warnings of 30-ft flood waters.

Australia has endured its wettest spring on record, causing six river systems in tropical Queensland to flood, as soaring temperatures in the states of Victoria and South Australia sparked warnings of devastating bushfires.

The rain has flooded coal mines and hit farming hard, with many roads still impassable, and prompted warnings of the dangers of crocodiles and snakes in flooded homes.

The inland sea that stretches across Queensland is dotted with the roofs of flooded homes, islands of dry ground crowded with stranded livestock and small boats ferrying people and emergency supplies.

On Saturday, coastal areas were preparing for the worst. Evacuations were under way in the town of Rockhampton where the Fitzroy River, one of Australia’s largest river systems, was expected to flood.

The town’s airport was closed to commercial flights, while relief officials warned the floods would likely reach more than nine metres (30 ft) in height.

Although emergency government funds have been made available to those worst hit to help with immediate needs, Prime Minister Julia Gillard said on Saturday the crisis was far from over.

“Of course there are a lot more things we’re going to do and going to need to do to help Queenslanders with these devastating floods,” she told reporters.

“It was just a sea of water and I thought the beach would never come to our house,” Kiddle told Gillard at an evacuation centre.

As the northeast struggled to recover, a new storm was brewing off the coast of mineral-rich Western Australia.