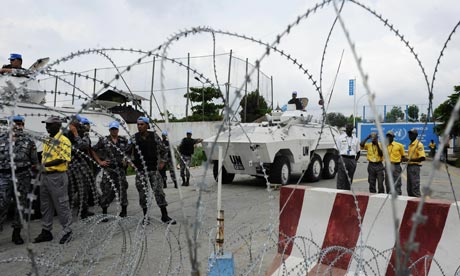 UN peacekeepers in Ivory Coast. The UN ambassador Youssoufou Bamba has called for international support to avert an escalation of post-election violence in the country. Photograph: Issouf Sanogo/AFP/Getty Images

Ivory Coast is on the “brink of genocide” and the world must take urgent action, the country’s new ambassador to the UN has warned. Youssoufou Bamba also claimed that some houses were being marked according to the tribe of the occupier.

The plea came as the UN accused the security forces of the incumbent president, Laurent Gbagbo, of blocking access to mass graves, saying investigators believed as many as 80 bodies may be in one building.

World leaders have stepped up pressure on Gbagbo to quit in favour of Alassane Ouattara, who is widely recognised as having won last month’s elections.

Speaking in New York, Bamba, who was appointed by Ouattara, described him as the rightful ruler of Ivory Coast. “He has been elected in a free, fair, transparent, democratic election,” he said.

“The result has been proclaimed by the independent electoral commission, certified by the UN. To me the debate is over, now you are talking about how and when Mr Gbagbo will leave office.”

Bamba alleged there had been a “massive violation of human rights”, with more than 170 people killed during street demonstrations. “One of the messages I try to get across is to tell we are on the brink of genocide. Something should be done.”

He implied that Ouattara strongholds, which are largely in the north, could be targeted by Gbagbo backers, saying: “If houses are being marked according to your tribe, what is going to be next?”

Bamba said he planned to meet every member of the UN security council. “I intend to meet all the 15 members to explain to them the gravity of the situation … We expect the UN to be credible and to prevent violation and to prevent the election to be stolen from the people.”

The UN has said its personnel were prevented by security forces accompanied by masked men with rocket launchers from reaching the scene of a mass grave identified by witnesses in a pro-Gbagbo residential neighbourhood on the outskirts of Abidjan.

Simon Munzu, the head of the UN human rights division, said investigators got as far as the front door of a building where between 60 and 80 bodies were believed to be before being forced to leave.

A second mass burial site was believed to be located near Gagnoa in the interior of the country, the UN said.

“We would be the very first to say that these stories are false if they turn out to be false,” Munzu said. “Our findings on the matter would have a greater chance of being believed than these repeated denials.”

The 28 November election was meant to reunite Ivory Coast, the world’s top cocoa producer, after a 2002-3 civil war. But a dispute over the results has provoked lethal street clashes and threatens to restart open conflict.

The UN general assembly last week recognised Ouattara as Ivory Coast’s legitimate president by unanimously deciding that the list of diplomats he submitted be recognised as the sole official representatives of Ivory Coast at the UN.

The UN’s peacekeeping chief, Alain Le Roy, said his troops had become a target of violence in Ivory Coast after a campaign of “disturbing lies” on state television suggested the UN was arming and transporting anti-Gbagbo rebels.

The US state department spokesman, Mark Toner, said America was planning for the possible evacuation of its embassy in Ivory Coast amid concerns of a full-blown conflict.

Ouattara and his prime minister, Guillaume Soro, remain holed up in a hotel in the commercial capital, Abidjan, protected by UN forces. Supporters of Gbagbo, the Young Patriots, have threatened to storm the hotel.

The group’s leader, Charles Bleé Goudeé, who is also Gbagbo’s youth minister, warned the west African regional bloc, Ecowas, not to send troops. “They should prepare themselves very well because we are thinking about totally liberating our country, and soon I will launch the final assault,” he said.

West African leaders have backed off their threat of military action for now. On Tuesday the presidents of Sierra Leone, Benin and Cape Verde delivered an ultimatum on behalf of Ecowas, hoping to escort Gbagbo into exile. He refused to budge.

An Ouattara adviser, speaking on condition of anonymity, said Gbagbo demanded a vote recount during the negotiations with the visiting delegation and wanted amnesty if he leaves office.

The Nigerian president, Goodluck Jonathan, said the leaders would return to Ivory Coast on Monday. “Whenever there is a dispute, whenever there is disagreement, it is dialogue that will solve issues,” Jonathan said in the Nigerian capital, Abuja, where Ecowas is based. “The dialogue is on. They are encouraging us to go back.”

The rising tensions have caused some 16,000 Ivorians to flee to Liberia, and the UN is preparing for the number to nearly double.

Among the refugees is Gluee Teah, who walked through the jungle for a day and crossed a river burdened by her two young daughters and an unborn child.

“I am nine months pregnant,” she said. “There is not much I can do. Who will help me take care of my children?”