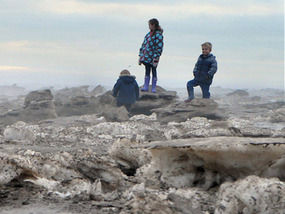 THESE children have seen nothing like it. They are standing amid ice floes in the sea off the North-west coast of England.

The mini icebergs were formed in the coldest weather Britain has experienced in 300 years. They cropped up at Solway Firth, Cumbria, in an area where the temperature stayed below minus 8C during the recent big freeze.

The biggest is around 20ft long and 3ft thick. A Met Office spokesman said yesterday that the floes were probably formed in the Cumbrian Hills.

He added: “They most probably tumbled off the hills where the water has frozen in rivers and streams and ended up in the sea where they float a bit like an ice cube in a gin and tonic.”

But amazed locals will have to make the most of the unusual Arctic picture because milder weather is set to melt them away.