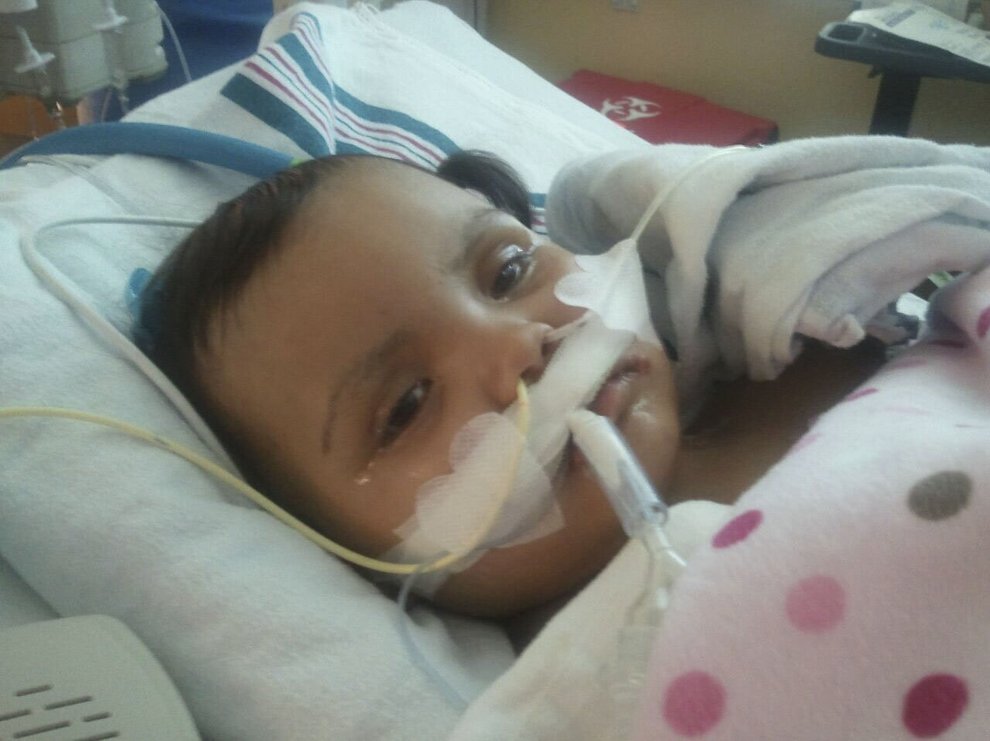 Malyia Jeffers, 2, has Streptococcus A, which has led to the amputation of both feet and a hand. She is now being treated at Stanford’s children’s hospital.

“This wasn’t a simple flu,” he said. “My daughter needed help.”

Little did he know that the girl was near death from a common infection that had invaded her blood and was raging out of control, ultimately causing the amputation of both of her feet and one of her hands.

Malyia Jeffers, 2, is still fighting for her life at Stanford University’s Lucile Packard Children’s Hospital, and her Sacramento parents are left wondering how a simple Strep A bug turned into a medical horror story.

“What could I have done differently?” asked Jeffers, who along with the girl’s mother, Leah Yang, has been keeping vigil in Palo Alto for nearly a month. He wonders, he said, whether he should have pushed harder to get his daughter care in the emergency room where the family waited for five hours to see a doctor.

“I’m angry, but I can’t deal with that right now,” he said. “I just want my daughter to get better.”

A Methodist spokeswoman, Erin MacEneaney, said the hospital cannot comment on specific cases because of privacy laws. “However, Methodist Hospital does everything to ensure the appropriate level of care for our patients,” she said.

The family’s ordeal began on a Sunday morning in early December, when the normally rambunctious Malyia developed a fever and became lethargic, Ryan Jeffers recalled.

When her symptoms persisted the next day, Jeffers and Yang, his fiancé, took their daughter to an urgent care center, where specialists told them to go to the emergency room. By the time they arrived at Methodist, he said, splotches that looked like bruises had developed on Malyia’s cheeks, and she was “getting really weak,” he said. “After a while, she couldn’t even walk,” and her fever had jumped to 103 degrees.

Jeffers, 29, said he pushed for immediate care, but was rebuffed. After about five hours, he said, he ambushed a nurse and demanded to see a doctor. The physician took blood samples that suggested Malyia was in liver failure, Jeffers said. She was taken by ambulance to the pediatric intensive care unit at Sutter Memorial Hospital. Doctors there had her flown to Stanford aboard a helicopter.

It turned out the girl was in septic shock from a Streptococcus A infection that somehow invaded her blood, muscles and internal organs. About 10,000 cases of “invasive group A streptococcus” infections occur every year in the United States, and as many as 20 percent of patients die from the condition, according to the Centers for Disease Control and Prevention.

Early treatment can reduce death and disability from the disease, but “even the best medical care does not prevent death” in every case, according to the CDC.

One of Malyia’s doctors at Stanford, Deborah Franzon, said a combination of the girl’s genetics and an unusually virulent strain of Strep A probably combined to make her so sick. The bacteria could have been passed to her from someone else, then entered her blood through a small cut, she said. Once in the bloodstream, it could cause fatal complications.

The youngster was close to death when she arrived at Stanford’s hospital, Franzon said.

“She was still awake and talking a bit, but she was ice cold, and her legs were so pale,” Franzon said.

The Stanford team put the girl on life support and gave her medicine to boost her blood pressure. They ultimately had to perform operations to amputate her lower legs and her left hand, which had been irreversibly damaged by a lack of oxygen.

Franzon said it is unclear whether immediate emergency care would have prevented amputation of her limbs. The decision to go forward with surgery, she said, was wrenching for both Malyia’s doctors and her parents. Doctors were unsure whether she would even survive an operation.

But a series of surgical procedures have been successful and, with prosthetics and rehabilitation, Malyia should “be able to do whatever she wants to do” in life, Franzon said.

In recent days, Malyia has shown flashes of her former spirit, said Jeffers. On dialysis and with a breathing tube in her throat, she has opened her eyes, is responding to questions and is watching television.

While Malyia’s parents have medical insurance, many of their daughter’s bills will go uncovered, including a $26,000 tab for her helicopter ride from Sacramento to Palo Alto, Jeffers said. The couple are paying just $10 a day to stay at the Ronald McDonald House, but must cover their food and transportation costs.

In addition to Malyia, Jeffers and Yang are raising a son, Jaden, 6, and Yang’s son Christian, 9. Jeffers works part time for a family storage business, he said, and Yang recently graduated from cosmetology school.

Friends have established a fund to help cover the family’s expenses. To donate, go to http://jeffersfamily.chipin.com/ryan-jeffers-and-family