Some 200,000 Australians have been affected by flood waters covering an area larger than France and Germany combined. 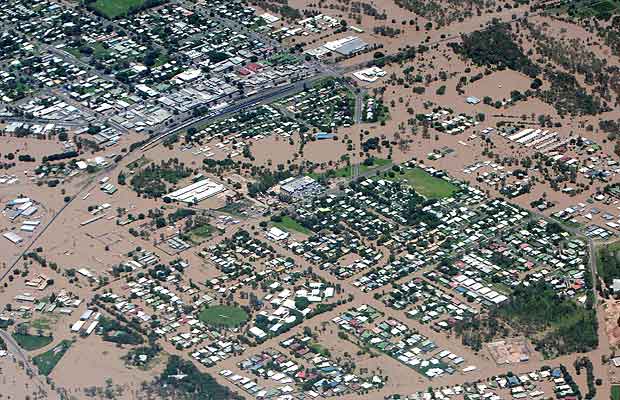 Military aircraft dropped supplies to towns cut off by floods as rising rivers inundated or isolated 22 towns in the state of Queensland.

Julia Gillard, the Australian prime minister, visited flooded Bundaberg, and flew over Emerald, as she promised that families whose homes were damaged would be eligible for disaster relief payments. On Thursday, she pledged about £650,000 in federal aid to match a relief fund already set up by the state government.

The Queen meanwhile extended her “sincere sympathies” to those hit by the floods.

Officials say half of Queensland’s 715,305 square miles is affected, after being hit by as much as 24 inches of rain this month, causing swollen rivers to overflow.

While the rain has stopped, the rivers are still surging to new heights and overflowing into low-lying towns as the water makes its way toward the sea.

The muddy water inundating thousands of homes and businesses has led to a shortage of drinking water and raised fears of mosquito-borne disease.

Anna Bligh, the Queensland premier, warned that drenched communities could be stuck underwater for more than a week, and cleanup efforts were expected to cost billions of dollars.

Northeastern Australia often sees heavy rains and flooding during the Southern Hemisphere summer, but the scope of the damage from the recent downpours is unusual.