Sexual assault we can take a bath in!

The humiliations of the patdown policy, which Janet Napolitano wants to expand, are an Orwellian assault on American freedom 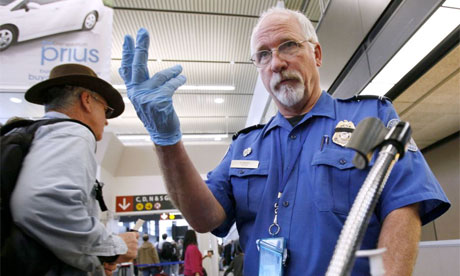 The holiday brought bittersweet news: unless the Transportation Security Authority disbands, I’ll never see a certain friend of mine again. His long-term unemployment finally ended, and next month, he starts a great new job. But it’s in Texas, too far to drive; from my place in Connecticut to his new home in San Antonio is 2,000 miles – 500 more than separates London from Moscow.

As an American – that is, someone considered lucky to get seven consecutive days off work – the only way I could possibly travel such distance is to fly. But flying includes the legal obligation I submit to having my genitalia groped by some TSA thug wearing the same latex gloves already shoved down nine dozen other strangers’ underwear. There’s only two ways an American flyer can reliably avoid this: be rich enough to buy your own plane, or a high-ranking congressman or other VIP exempt from the indignities they inflict upon ordinary citizens.

The ACLU maintains an ever-growing database of these indignities, many so graphic they’re illegal to broadcast over public airwaves. Actions that violate FCC standards are embraced by the TSA. “Mary in Texas” reported:

The TSA agent used her hands to feel under and between my breasts. She then rammed her hand up into my crotch until it jammed into my pubic bone … I was touched in the pubic region in between my labia … She then moved her hand across my pubic region and down the inner part of my upper thigh to the floor. She repeated this procedure on the other side. I was shocked and broke into tears.

“In the four times she explored the area where my inner thigh met my crotch, she touched my labia each time, and one pass made contact with my clitoris, through two layers of clothing. I told her I felt humiliated, assaulted and abused … In my work as a nurse, if I did what the TSA did against a patient’s will it would be considered assault and battery, and I did not see how the TSA should have different rules.”

Recipients of such treatment aren’t allowed to show distress. Melissa from Massachusetts did anyway:

“I was shaking and crying the entire time. I was begging them to hurry up but they kept stopping and telling me to calm down. It is impossible to gain composure when a stranger has her hands in your underwear.”

I couldn’t. I know my limits: can’t sprout wings and fly, spin straw into gold, or ooze obedience toward anyone who’d treat me as the TSA treats Melissa, Mary, Chris and countless others. And once I said something rude – even an obscenity-free comment like “Have fun on your knees, sniffing my crotch like the dog that you are” [see top photo] – I’d be arrested on terrorism charges and the media would run sympathetic stories about poor TSA agents disliked for merely following orders. Self-described patriots would say “Disrespecting authority is unAmerican” and recommend harsh punishment for me.

There’s no logical consistency backing TSA policies. On Christmas eve, it added insulated Thermos bottles to its extra-scrutiny list, not after learning of some beverage-container plot but because a bureaucrat thought, “A terrorist could, maybe, I dunno, do bad stuff with one.” The Thermos-threat article said the TSA’s usual ban on more than 3.4 ounces of liquid still applies. This surprised me because last time I flew, in 2006, regulations only allowed three ounces; the TSA, no doubt, claims sound, secret reasons why that four-tenths of an ounce of shampoo stopped being dangerous.

Meanwhile, every month, more American airports install nude-photo pornoscanners and fingerbang patdowns, while less-intrusive (for the time being) searches spread on other mass transit modes. Washington, DC kicked off the holiday season on the solstice by instituting “random” bag searches on the Metro; New York City has had them at scattered subway stations since 2005.

Last month, Janet Napolitano floated the idea of TSA searches for bus, ship and train passengers; she later withdrew it, but I’m sure it will be re-introduced after Americans come to accept such treatment in airports – which Napolitano has just confirmed “for the foreseeable future” (that is, permanently).

So, I can’t fly. And maybe, someday not far off, I won’t be able to ride any form of mass transit either, unless I become so debased and broken in spirit that I don’t mind vacation and business trips bookended by government-mandated sexual humiliation. And while my government requires such dehumanisation, I mournfully recall 20 years ago, when the cold war ended and we Americans thought concepts like “freedom” and “human dignity” would rule the future.