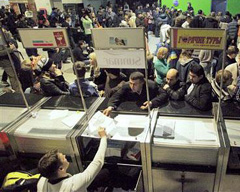 A large group of passengers, many stranded for more than 24 hours, stormed the passport control zone, demanding information on their flights.

Despite upbeat statements by the Moscow power grid company and airport officials, “electricity is still largely off, with baggage conveyors and escalators remaining at a standstill,” Interfax news agency reported.

Some 200 flights were cancelled on Monday after freezing rain snapped power lines and cut electricity to Domodedovo the day before, while a lack of de-icing fluid kept planes from taking off at Sheremetyevo, another big Moscow airport.

Sub-zero temperatures and snow are typical for Moscow’s winter months, but the weekend saw an unusually heavy downpour of rare freezing rain that can form a thick layer of ice on power cables, eventually breaking them under its weight.