Tony Blair made made a profit of at least £710,000 last year from a mysterious web of companies set up to further his business interests, it can be revealed. 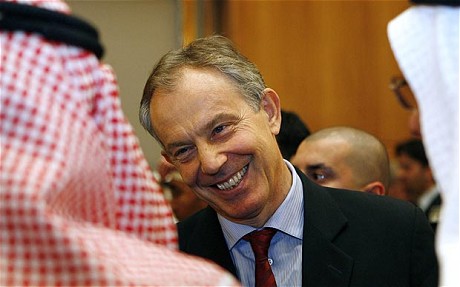 Tony Blair on a visit to Kuwait this year. In the 11 months up to 31 March, his company’s net assets increased to 2.159 million pounds

The former prime minister’s companies also declared net assets of £2.2 million – four times what they were worth last year – suggesting Mr Blair’s “pulling power” is as strong as ever.

The profits, funnelled through an “opaque” and highly complex web of financial structures, was declared to Companies House as it closed for business for Christmas last week.

The money is believed to have come from his often controversial private work, including his six-figure speaking fees, his banking and insurance consultancies, including work for JP Morgan, and his pay from advising Middle Eastern and African regimes.

Mr Blair – who has made at least £20million since leaving Downing Street – has a commercial consultancy, called Tony Blair Associates, plus paid jobs advising a US bank and a Swiss insurer.

In addition, millions of pounds have passed through two parallel company structures, called Windrush Ventures and Firerush Ventures, in the last three years.

Mr Blair has so far refused to discuss what these financial structiures, centered on a pair of mysterious limited partnerships, are for.

What Firerush does is still a mystery, the several companies linked to Mr Blair with that name have yet to make any financial declarations.

However the company accounts give some insight into the group of Windrush firms and the cash they generated during the 11 month period up to the end of March this year.

The Windrush firms appear to oversee his international work, both private and public.

One company Windrush Ventures Limited pays for Blair’s £550,000 five-year-lease on his Mayfair office, in Grosvenor Square near the US embassy.

Last year it also took out an additional £12,000 lease, although it is unclear what this was for, and spent nearly £200,000 on IT and telecoms equipment.

The firm also charges other parts of the business empire £5.2 million a year for undisclosed “management services”.

The company is personally owned by Mr Blair. The limited financial information available under company law shows that more than £5 million has been passed through several other Windrush partnerships to the firm during the last year.

The public declarations come in the wake of claims that Mr Blair is earning up to £100,000 for making guest appearance and was paid a reported £600,000 signing on fee by the prestigious Washington Speakers Bureau.

He is also said to have earned around £6 million in consultancy fees, including £500,000 a year from Zurich Financial Services, £2 million from JP Morgan, the investment bank, and another £1 million from the Kuwaiti Royal Family.

As a former Prime Minister he also gets money from the public purse, including a £63,468 pension and an £84,000-a-year office allowance.

Earlier this year it was also revealed that the police bodyguards protecting the former prime minister were costing the taxpayer £250,000 a year in expenses.

The confusion over the role of Mr Blair’s firms is increased by the fact that, in the past, they have also been used to handle some charitable donations for projects in Africa.

A Sainsbury family charity, the Gatsby foundation, declared it has paid a total of £992,000 to the Windrush limited partnership. This was for charitable projects in Rwanda, in the two financial years to April 2009.

The Gates foundation, funded by the founder of Microsoft, declares it paid $2.46m (£1.49m) to the Windrush LP in June 2008, for similar projects in Sierra Leone.

Mr Blair’s office has claimed his companies are set up “sensibly to administer his different projects, in accordance with relevant regulations and company law in the UK.

“He has an operation that has over 80 people working for it around the world. This was done on the basis of advice.”

The accounts give no indication of how much Mr Blair pays himself from the fees and other money channelled through his companies.

A spokesman for Tony Blair said: “Tony Blair does not get paid for his role as Quartet Representative, or by any of his charities.

“Tony Blair is a UK resident taxpayer on all of his income, and the Windrush group of entities is UK registered for tax and regulatory purposes.”

A footnote on the statements reads: “The Office of Tony Blair is a trading name of Windrush Ventures Limited”.

In August Mr Blair said any royalties from his autobiography A Journey – including a reported £4.6m advance – would go to the Royal British Legion’s Battle Back Challenge Centre which is set to open in summer 2012 to help former soldiers injured in the Gulf War.