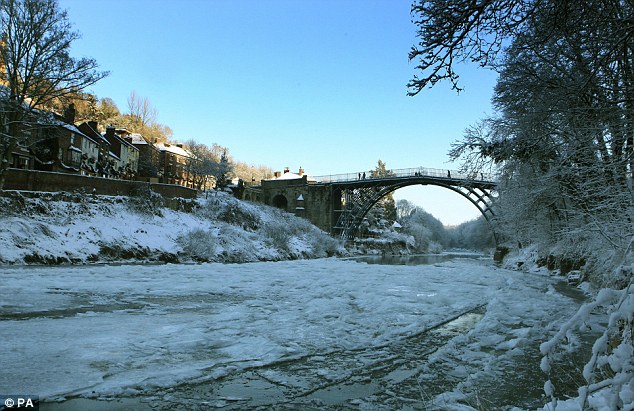 Cold crossing: A frozen River Severn at Ironbridge near Telford, Shropshire, as the icy December continues

Britons awoke yesterday to the coldest Christmas Day on record.

In parts of the country, the mercury touched minus 18C, chillier than Lapland, and few places saw temperatures rise above freezing.

At 8am in Shawbury, Shropshire, it was minus 15.9C and in Altnaharra, in the Highlands of Scotland, minus 18.2C.

Forecasters predict this December is likely to be the coldest on record. The previous coldest was in 1890, when the average temperature for the whole month for England was minus 0.8C.

The average temperature for all of Britain up to Christmas Eve this year was also minus 0.8C, though forecasters said the weather would improve from Wednesday.

The Arctic snap brought travel chaos in the run-up to Christmas, with thousands of passengers having to sleep in terminal buildings after their flights were delayed by snow and ice.

Their spirits will hardly have been lifted by the revelation that airports throughout Europe and America have put Britain to shame with military-style weather-busting operations.

As our pictures show, foreign airports often deployed more than half-a-dozen machinesside by side to clear runways while Heathrow appeared to use just two at a time.

During the chaos at Heathrow, which is run by Spanish-owned BAA, some stranded passengers spent three nights sleeping on the floor and on luggage trolleys.

British airline bosses accused BAA’s £1million-a-year chief executive Colin Matthews of ‘blowing it big-time’ as foreign rivals managed to get most of their flights to take off and land.

Unlike BAA, which spent just £500,000 on new snow-clearing equipment in the past year – the equivalent of half Mr Matthews’s pay – continental competitors spent tens of millions to ensure airports would stay open in such conditions.

Similarly, Gatwick, which is owned by a group of international investment funds, has more vehicles than Heathrow, with the first of two new snowploughs delivered last weekend. Gatwick is spending £9 million on new vehicles.

On the Continent, airport emergency plans swung into action to keep passengers moving.

At Schiphol in Amsterdam, 98 snowploughs and snowblowers were in action. Although the airport was shut for periods last week, it maintained the best record of flight clearances in Europe.

Arlanda airport in Stockholm has never closed since it opened in 1962. It boasts the world’s fastest snow-clearing team who use a fleet of 17 Plough, Sweep and Blow (PSB) machines specially built by Volvo. Nine of the machines were being driven alongside each other, meaning that two mile-long runways, each 150ft wide, were cleared in less than ten minutes.

There was also a fleet of 30 other snowploughs and snowblowers and 20 de-icing machines.
Workers at the international hub of Leipzig/Halle in Germany were organised into ‘clearance platoons’.

They used snowploughs, sweepers and blowers to keep runways clear. Two hundred workers drove 100 vehicles plus eight de-icers and a special Volkswagen van that uses computers to assess when the de-icing teams need to move in.

Frankfurt – Germany’s busiest airport – called upon 220 snowploughs and 42 de-icers. Strasbourg International airport in France deployed 50 snowploughs and blowers and 15 de-icing machines. The airport kept open for most of the week.

Copenhagen airport closed for one hour in November – the first time it had shut in 23 years – but not during last week’s freeze. It is one of Europe’s smaller airports but still has a fleet of 40 vehicles, including 22 snowploughs and three de-icers.

Bosses at Charles de Gaulle, France’s biggest airport on the outskirts of Paris, spent £24million last year on snow-beating equipment and even more will be spent this year. The airport has 74 machines, including snowploughs, snow-blowers and de-icers.

North American airports lead the way when it comes to coping in wintry conditions. Giant snow-melting machines nicknamed ‘snowzillas’ are operated by almost all of the larger airports, including New York and Toronto, where BAA boss Mr Matthews was born.

‘They were shambolic and all over the place. There was poor planning and little communication both internally in BAA or with the airlines.’