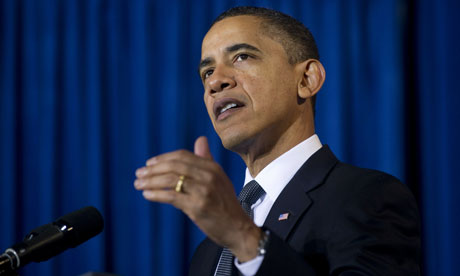 Barack Obama was forced to sign the bill despite admitting that he opposed some of its provisions. Photograph: Saul Loeb/AFP/Getty Images

The US president, Barack Obama, will today sign into law measures approved by Congress extending tax cuts introduced by George Bush amid Democratic complaints that the breaks favour the rich.

Despite objections from many of Obama’s fellow Democrats, the House of Representatives passed the $858bn (£548bn) package of renewed tax cuts last night. The package, which also extended benefits for the long-term unemployed for 13 months, was passed by 277 votes to 148. On Wednesday the Senate passed it by an overwhelming 83-15 margin.

Obama has been forced to bend to the resurgent Republicans, his current position on taxes contrasting sharply with his stance earlier this year when he and his fellow Democrats fought against renewing tax reductions for the wealthiest Americans – those with household incomes above $250,000 – while supporting continued cuts for middle-class taxpayers.

Congress was racing to enact the legislation as it faces an end-of-year deadline when the Bush-era tax cuts from 2001 and 2003 are set to expire. The bill marked the second economic stimulus package passed by Congress in the last two years. The first one, Obama’s $814bn spending bill, was opposed by Republicans who complained about its impact on annual deficits, now hovering at about $1.3tn annually.

The International Monetary Fund gave a guarded welcome to the package. Dominique Strauss-Kahn, the IMF managing director, said economic stimulus was vital for the US because “growth is the main problem to fix” but cautioned: “But having in mind always that there is no free lunch. And so what you do today has to be repaid later on. And you cannot just do it now without saying, ‘How are you going to repay it?'”

The bill will extend tax cuts for two years for millions of Americans, even the wealthiest. Besides renewing jobless benefits it will provide a variety of other tax breaks for working families, college students and businesses. It will also prevent a rise in taxes on capital gains and dividends.

What galled many Democrats was Republican generosity on inheritance taxes. At the insistence of Republicans, the first $10m of a couple’s estate could pass to heirs without taxation. The balance would be subject to a 35% tax rate.

House Democratic leaders want to bring back the 2009 estate tax levels. That year, individuals could pass $3.5m to their heirs tax-free. Couples could pass $7m, with a little tax planning, and the balance was taxed at a top rate of 45%.

Mike Pence, a Republican congressman, who is exploring a possible run for president in 2012, criticised the legislation because it only extended the tax cuts temporarily.

“The reality is uncertainty is the enemy of prosperity,” Pence said. “It’s a bad deal for taxpayers, it’ll do little to create jobs.”

The bill, though, represents a major victory for Republicans, who fought hard to keep taxes low on the highest incomes. Largely marginalised in the negotiations leading to the bill, House Democrats emphasised their unhappiness with Obama. Representative Rob Andrews said he was supporting “an imperfect bill” in hopes of stimulating job creation.

Republican Representative Eric Cantor, in line to become majority leader, said the measure, while not perfect, marked a “first step” toward economic recovery.

After the Senate vote on Wednesday, Obama declared himself still opposed to portions of the legislation because of the tax breaks for the rich. Nevertheless, he said, compromise was necessary.

“I know that not every member of Congress likes every piece of this bill, and it includes some provisions that I oppose. But as a whole, this package will grow our economy, create jobs, and help middle class families across the country,” Obama said in a statement.