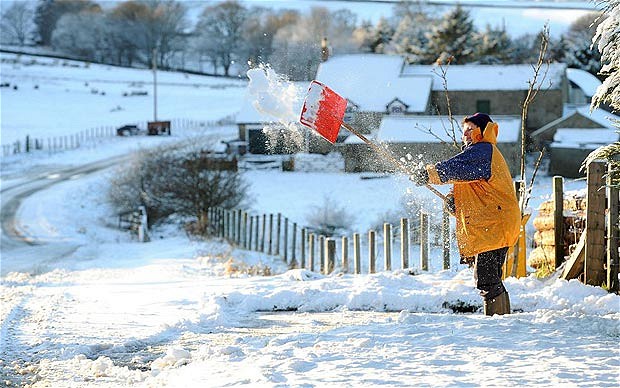 Experts have warned that Britain could be shivering in temperatures colder than Siberia over the next few days.

Customers relying on home deliveries face an anxious wait, with hauliers warning that thousands of items could still be stuck in warehouses on Christmas morning.

Temperatures are expected to drop to -15C (5F) in the coming days, leaving Britain colder than the North Pole, the Arctic and Alaska.

It is feared that shops which have already been severely hit by freezing conditions in January and November will not be able to cope with a third spell of bad weather. Yesterday Amazon became the latest retailer to bring forward its final order deadline for guaranteed Christmas delivery while the shopping channels QVC and Ideal World said they could not guarantee that orders placed now would arrive in time for Christmas.

Douglas McWilliams, the chief executive of the Centre for Economics and Business Research, said: “As many as 800 or 900 businesses could go bankrupt which otherwise wouldn’t have, because this is the straw that breaks the camel’s back.”

David Greaves, director of the insurance company RSA, added that, with the economy already suffering a £4.8billion loss and businesses fearing a further £8.4billion hit because of the weather, “many smaller businesses may not be in a position to cope”.

Synovate, a retail analyst that counts shoppers electronically at 5,500 British stores, said high streets have already lost a week’s worth of shoppers this winter because of snow and ice.

It said shopper numbers had been down by almost 50 per cent in some areas, with a nationwide 15 per cent fall from Nov 28 to Dec 4, a seven per cent fall from Dec 5 to Dec 11 and a fall of almost five per cent on Sunday compared with the same time last year. The British Retail Consortium said that shoppers would not be put off so easily during this cold snap because it is the last weekend before Christmas. Sarah Cordey, a BRC spokesman, said shops had largely “caught up” with their losses from November but stores were hoping for a bumper weekend to make up the loss they made at the beginning of the month.

Up to 12ins of snow are predicted to fall in parts of Britain, accompanied by strong winds. Temperatures are likely to struggle to get above freezing over the weekend, dropping at night to between -7C (19.4F) to -15C (5F).

The Met Office has issued nationwide severe weather alerts lasting until at least Monday, warning of treacherous ice on roads and pavements plus snow.

Hauliers said that it was crucial that roads were gritted if Christmas deliveries were to arrive on time. Kate Gibbs, from the Road Haulage Association, said that all backlogs from the last severe spell had been cleared but that was no guarantee that packages would not be stuck again.

Royal Mail said it would be carrying out an extra 7,000 rounds on Sunday to ensure parcels and cards were delivered.