Brazilian politicians have voted to give themselves a 62 per cent pay rise, increasing their salaries to more than 50 times the minimum wage. 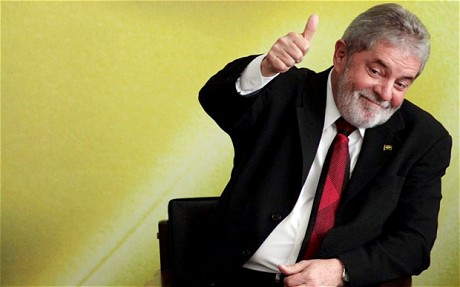 President Luiz Inacio Lula da Silva, who has only two weeks left in the job after serving two full terms, joked that he was ‘lamenting’ the vote because he would not benefit Photo: AP
Robin Yapp

A ‘lightning’ vote rushed through the country’s National Congress before it shuts for the year also awarded a 134 per cent pay rise to the president and a 149 per cent increase to ministers.

The changes mean Brazil’s 513 deputies, the equivalent of MPs in the country’s lower house, and 81 senators in the upper house will have parity with the country’s Supreme Court judges, earning R$26,723.13 (£10,063) a month.

But the decision was criticised by some deputies in light of recent Government promises to cut down on public spending in order to help control inflation.

Luiza Erundina, of the PSB party, said that her colleagues had shown “disrespect” to the public, adding: “The deputies are going to end up being attacked in the streets.”

Guido Mantega, Brazil’s finance minister, said last week that he will use a “heavy hand” to cut budgets as he pledged to halve the loans provided to the country’s state development bank BNDES from their 2010 level.

The increases mean the wage bill for Congress will increase by R$136m (£51m) a year.

But the overall effect nationally is likely to be around R$1.9bn (£715m) because the salaries of more than 1,000 state deputies and 52,000 local councillors are linked to those of elected politicians in the capital Brasilia.

The change was voted through both elected houses in a matter of minutes late on Wednesday and will be effective from February 1 when newly elected deputies and senators take up their posts.

A handful of opponents spoke out to condemn the move, which means politicians will take home 52 times Brazil’s minimum wage even before a generous range of allowances is taken into account.

Marina Silva, the Green Party candidate who won 19 per cent of the vote in Brazil’s national election in October, said salary increases should have been kept in line with inflation.

Parliamentarians had not had a pay rise since 2007 but inflation has gone up by only around 20 per cent since then.

But President Luiz Inacio Lula da Silva, who has only two weeks left in the job after serving two full terms, joked that he was “lamenting” the vote because he would not benefit.