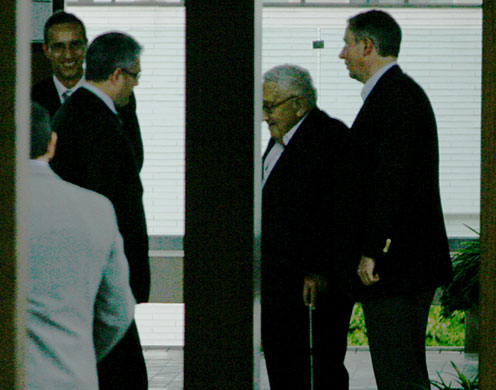 Henry Kissinger is heard saying on newly released Nixon tapes that the genocide of Soviet Jews would not be an American concern.

The tapes chronicle President Richard Nixon’s obsession with disparaging Jews and other minorities.

Kissinger’s remarks come after a meeting he and Nixon had with Israeli Prime Minister Golda Meir on March 1, 1973 in which Meir pleads for the United States to put pressure on the Soviet Union to release its Jews. Nixon and Kissinger, then the secretary of state, dismiss the plea after Meir leaves.

“The emigration of Jews from the Soviet Union is not an objective of American foreign policy,” The New York Times on Saturday quotes Kissinger, as saying on the tapes. “And if they put Jews into gas chambers in the Soviet Union, it is not an American concern. Maybe a humanitarian concern.”

Nixon replies, “I know. We can’t blow up the world because of it.”

Six months later, during the Yom Kippur War, Nixon rejected Kissinger’s advice to delay an arms airlift to Israel as a means of setting the stage for an Egypt confident enough to pursue peace. Nixon, among other reasons, cited Israel’s urgent need.

The American Gathering of Holocaust Survivors and their Descendants in a statement called for an apology from Kissinger, who is still consulted by Democratic and Republican administrations and by Congress on matters of state.

“Henry Kissinger’s comments are morally grotesque and represent a disgraceful perversion of American values,” said the statement. “He owes an apology to all victims of the Nazi Holocaust.”

Nixon secretly recorded his White House conversations. After this was revealed during congressional investigations, the tapes became government property and have been released over the years in intervals.

Elsewhere on the batch of tapes recently released by the Nixon Library, the late president repeats many of the ethnic and racial slurs that had appeared on earlier such releases: Irish are “mean” drunks, he says; Italians “don’t have their heads screwed on tight”; Jews are “aggressive, abrasive and obnoxious”; and it would take blacks “500 years” to catch up with whites.

1 thought on “Henry Kissinger: Gassing Jews Would Not Be A US Problem”