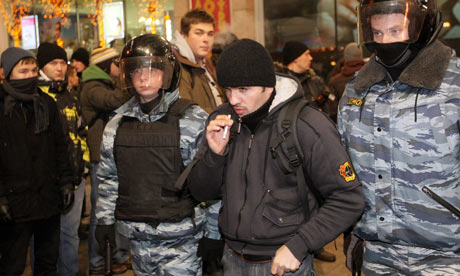 Russian riot police officers on the streets of Moscow today. About 30 people were hurt during protests by nationalist youths. Photograph: Sergei Chirikov/EPA

Up to 1,000 people were arrested in Moscow today as nationalist youths rampaged throughout the city for the second time this week, shouting racist slogans and calling for the death of immigrants.

The unrest, four days after 5,000 rioters wrought carnage outside the Kremlin walls, upended the city as night descended. Riot police rode through Moscow in army trucks and took up positions at key railway stations and public squares, hoping to prevent the ethnic clashes that left dozens of men from the Caucasus and central Asia injured at the weekend.

About 30 people were reportedly injured, with five taken to hospital. Police confiscated airguns, knives and at least one samurai sword.

Nationalist blogs had called for Russians to gather at Kievsky railway station in central Moscow to continue protests over the death by shooting on 6 December of a Spartak supporter during a fight with men from the Caucasus.

Hundreds of nationalist youths, including many young women, gathered at the station while hundreds more spread across the city. A smaller number of men from the Caucasus met with the aim of fighting back. Several clashes were reported.

The make-up of the crowd was much younger, and seemingly less aggressive, than the one that gathered on Saturday.

“We came here because they screw our women, rape our women,” said Vadim, 15, referring to migrants from the Caucasus, Russia’s southern, mainly Muslim region. “We want them out of Moscow.”

The protests, originally organised by Spartak’s unofficial fan club, have spread to include Russia’s disaffected youth, sparking fears that racial tensions may have irreparably boiled over. Racism is widespread and widely tolerated in the country, with dozens of immigrants killed and hundreds injured each year.

The unrest, not seen in Moscow for years, has raised doubts over its ability to safely host the 2018 World Cup, which it was awarded two weeks ago.

“In general, and as for all major international competitions and events, security planning and implementation is primarily the responsibility of the host country,” a Fifa spokesman said. “There are eight years to go before the 2018 Fifa World Cup … In working with Fifa, we are confident that the Russian authorities will … ensure adequate security plans will be in place.”

About 65 people were detained after Saturday’s riot but all were soon released. So far, 11 criminal cases have been opened. Moscow’s mayor, Sergei Sobyanin, made no comment on the unrest until Tuesday, when he said: “If someone thinks that he can do anything he wants in the city, go around killing innocent people, then they are mistaken.”

The prime minister, Vladimir Putin, does not plan to comment, his spokesman told Russian radio.