The elite puppet governments use these tactics often: The Quebec Provincial Police were then forced after three days of  public outrage to admit that these three men were indeed their officers operating undercover. 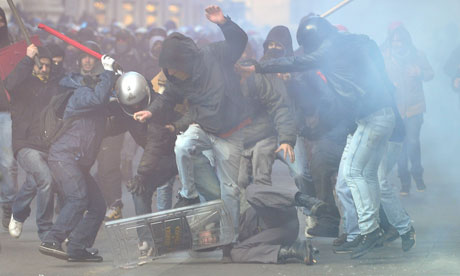 Protesters attack a policeman in the Via del Corso in Rome. Photograph: Alberto Pizzoli/AFP/Getty Images

Italy’s interior minister today agreed to address parliament on the rioting that broke out in Rome yesterday as Silvio Berlusconi won a controversial vote of confidence to keep his rightwing government alive .

Roberto Maroni of the Northern League gave the undertaking after opposition claims that some of the rioters were police. Anna Finocchiaro, leader in the Senate of Italy’s biggest opposition group, the Democratic party, said: “There were evidently people who had been infiltrated [among the rioters] and who put at risk the demonstrators and the police. Who commanded them? Who paid them? What were they meant to cause?”

Photographs taken during the disturbances have prompted not only suspicions but bitter memories of the 1970s when rogue members of the police and intelligence services lent themselves to a so-called “strategy of tension” aimed at raising the level of violence to the point at which it could be used to justify draconian repression or even a coup d’état.

Yesterday, groups of masked and hooded demonstrators rampaged through the capital attacking police, smashing windows, setting fire to vehicles and throwing up barricades. The mayor of Rome, Gianni Alemanno, said first indications were that they had caused damage of about €20m. The disturbances were thought to be the most violent in Rome since 1977.

One of the participants in this week’s rioting was photographed hurling a dustbin at members of the revenue guard and wielding a long shovel. But in other shots, he appears to be standing with the guards raising a truncheon in one hand and holding a pair of handcuffs in the other.

One blog carried a photograph of a demonstrator being held on the ground by officers whose uniform boots are seemingly identical to his. Further controversy surrounded a revenue guard who was ambushed by rioters.

An official statement said he was rescued “thanks to the intervention of colleagues, some in uniform and others in civilian clothes”. But, according to Italian media reports, the revenue guard subsequently briefed reporters to the effect that it never deployed officers in civilian clothing in demonstrations or disturbances.

The revenue guard, the Guardia di Finanza, is a semi-militarised body, similar to the Carabinieri, which deals with financially related crime including smuggling, money laundering and tax evasion.

As the controversy surrounding the riots continued, Berlusconi began trying to consolidate his position in the lower house of parliament where a censure motion was defeated yesterday by only three votes. After the Union of Christian and Centre Democrats turned down his offer to join the government, Berlusconi said he would attempt to win over individual deputies.