The Metropolitan Police Commissioner, Sir Paul Stephenson, said that outlawing the demonstations was an option for the authorities but conceded it could anger protestors further.

He admitted he was “very worried” about the effect on law and order in town centres and suburbs caused by large numbers of officers being sent to the centre of the capital.

Despite widespread criticism over the policing of the protests, and warnings that the Met’s tactics risk leading to the death of an innocent bystander, Sir Paul said he was proud of the professionalism of the 3,000 officers on duty last week.

Water Cannons Would Turn London Into A Battle Zone – And, As In Northern Ireland, The Rioters Would Fight Back 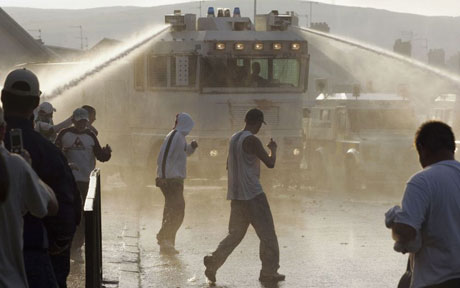 The PSNI use a water cannon in north Belfast, 2005 (Photo: Getty)

Last weekend, Theresa May, the Home Secretary, appeared to be enticed by the idea of using water cannon to control demonstrations that have turned into riots. But by Monday she had changed her mind. She told the House of Commons that she did not believe that using water cannon would improve the way the Metropolitan Police Force deals with rioting demonstrators.

That conclusion is endorsed by almost every senior police officer in Britain: very few want to use water cannon as a means of crowd control, and most of them were surprised, and even slightly alarmed, that Theresa May had considered the option.

This is not to say that senior officers all think water cannon are ineffective. On the contrary, being dowsed with powerful jets of water is enough to persuade all but the most committed rioters that it is time to go home and warm up – which would make them very useful in dealing with groups such as the hard-core of 4,000 or so demonstrators who occupied Parliament Square last week.

Police officers on that occasion appeared to be unsure of what to do. They were reluctant to storm into the crowd and pull out those damaging property and arrest them, not least because every officer knows that his every move is being filmed by someone in the crowd – and being filmed “going too far” in a physical confrontation with an “innocent rioter” is a quick way to commit career suicide, if not to get yourself charged with assault.

So officers tended to avoid confrontation and to wait and watch instead. That left them open to the charge that their passivity was encouraging the demonstrators to go on the rampage.

Water cannon seem initially to have struck the Home Secretary as a way out of the uneasy compromise between not doing enough and doing far too much. Using water cannon means that cops don’t hit people with their truncheons or their fists. There is no danger of videos posted on YouTube showing, for example, an innocent newspaper vendor being knocked to the ground by police officers in riot gear – the case of Ian Tomlinson, who died after being caught up in the G20 demonstrations.

But they have one very significant drawback: they turn the location of a demonstration into a battlefield. Water cannon are an escalation of the arms race between the cops and the demonstrators – and those demonstrators who come looking for a fight (and most of those who caused the trouble last week did) will respond by increasing the level of violence.

Policing in Britain depends on the consent of most of those who are policed. The police in this country are not an army of occupation, like those in the East European satellites of the Soviet Union. Our police are not armed: they are always heavily outnumbered by demonstrators, usually by a factor of at least ten to one. That congregations of thousands of people do not turn into uncontrollable riots is largely a consequence of the fact that most people, including most demonstrators, accept that the police play a legitimate role in minimising the threat to the disruption of public order.

The police, in other words, are not routinely perceived as “the enemy”, to be attacked whenever possible. But that’s what happens when the police aren’t seen as being on the side of the citizens, but as an army of occupation, an instrument of bullying, brutal state power. That is how the police were perceived by a large portion of the population in Northern Ireland, and it’s why water cannon were useful there. But then they couldn’t make relations between the police and the rest any worse than they already were.

That, of course, is very far from being true in mainland Britain today. Using water cannon might indeed work very effectively in dispersing crowds the first time they were wheeled out – but they would change the relationship between the police and the people involved in demonstrations from a basically co-operative one to a basically hostile one. There is still a long way to go before that relationship becomes defined by mutual antagonism here. But the slide down that particular slippery slope can happen very quickly, and if you want to see what the bottom of it is like, just consider Northern Ireland, where officers had plastic bullets as well as water cannon – and it wasn’t enough to put an end to lethally violent demonstrations.

So the Home Secretary came to the right conclusion. Most of those who demonstrate aren’t violent, and they are entitled to protest in public against polices they don’t like. Most of us want to live in a society where that basic democratic right is respected. But that right would disappear if protesting brought with it the risk of water cannon. Being without them leaves the police in a very difficult position. But that’s better than the alternative. As Orson Welles once said: “The police’s job is only easy in a police state.”

Alasdair Palmer is the Public Policy Editor of the Sunday Telegraph. He has previously worked for the Spectator and won the Douglas Home Prize for Journalism in 2002. He is married with two children.