The European Commission has demanded Britain justifies the widespread and routine fingerprinting of children in schools because of “significant concerns” that the policy breaks EU privacy laws. 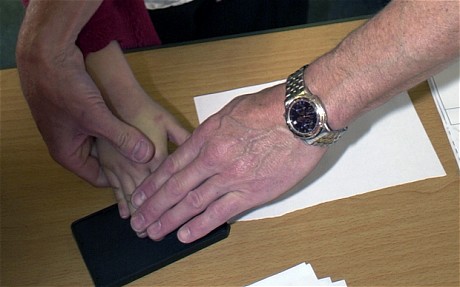 The commission has taken up the case of a father who has battled education authorities because his daughter’s fingerprints were taken without permission Photo: ALAMY

The commissioner is also concerned that parents are not allowed legal redress after one man was told he could not challenge the compulsory fingerprinting, without his permission, of his daughter for a “unique pupil number”.

In many schools, when using the canteen or library, children, as young as four, place their thumbs on a scanner and lunch money is deducted from their account or they are registered as borrowing a book.

Research carried out by Dr Emmeline Taylor, at Salford University, found earlier this year that 3,500 schools in the UK – one in seven – are using fingerprint technology.

EU data protection rules, Brussels legislation that overrides British law, requires that the gathering of information such as biometric fingerprints, must be “proportionate” and must allow judicial challenges.

“We should be obliged if you could provide us with additional information both regarding the processing of the biometric data of minors in schools, with particular reference to the proportionality and necessity in the light of the legitimate aims sought to be achieved, and the issue concerning the availability of judicial redress,” said the letter, seen by The Daily Telegraph.

Hank Roberts, a member of the executive of the Association of Teachers and Lecturers, welcomed the EU’s intervention.

“I am very pleased the European Commission is taking action. I believe the fingerprinting of children is a totally unnecessary infringement of civil liberties that could have far reaching implications,” he said. “The legal situation must be looked at. This is being done surreptitiously without parents being told.”

The commission has taken up the case of a Scottish father who has battled education authorities for several years because his daughter’s fingerprints were taken without the family’s permission.

Refused permission to take the case to court, the father was told by Information Commissioner’s Office, the British data protection watchdog, that the secondary school did not need to ask parental permission to fingerprint his child.

He was also informed that his daughter’s “consent could not be freely given” because her fingerprint scan was needed if she was to be able to get school dinner.

“There are significant concerns that the compulsory fingerprinting of children for these purposes is against the EU data protection directive,” said a commission official.

Guy Herbert, general secretary of the NO2ID privacy campaign, said: “The big issue is that people have no redress. There is nothing people can do. If we had a right of privacy then people would have access to the courts.”

Schools are not currently under a legal duty to consult parents before collecting biometric data, although the government advises them to do so.

The commission is acting on concerns by the “Article 29 Working Party”, a group of EU data protection watchdogs, including the British Information Commissioner.

“Over the years, there has been an increase in access control in schools. This may involve collecting, at entry, biometric data such as fingerprints, iris, or hand contours. In certain situations such means may be disproportionate to the goal, producing an effect which is too intrusive,” the report concluded.

In May, the incoming Conservative and Liberal Democrat coalition promise to “outlaw the fingerprinting of children at school without parental permission”. A government spokesman was not available yesterday to comment on the commission’s letter.