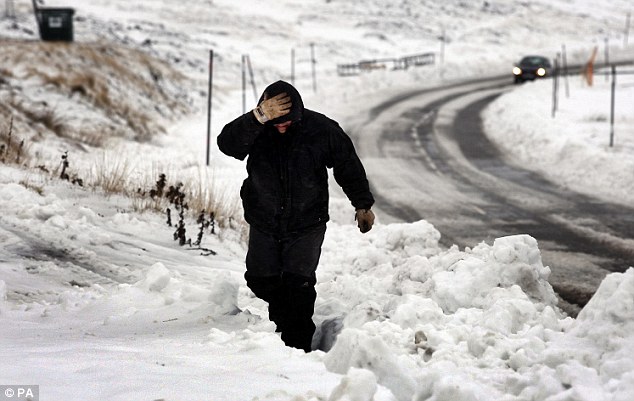 Record: A walker trudges through deep snow during the first round off the Big Freeze in Braemar, Scotland, which could see record low temperatures this winter

Britain is bracing itself for fresh snowfalls tonight as a second bout of the Big Freeze is predicted to stretch its icy grip across the country.

Forecasters are predicting temperatures could fall below the current record low of minus 23C and that the bitter cold will extend into mid-February.

The dramatic change in weather conditions is due to arrive tonight with up to eight inches of snow drifting in on savage Arctic winds.

With severe weather warnings in place for ten regions, the cold is expected to first blow in through the east of Scotland and then push into Northern England overnight, creating icy conditions by rush hour tomorrow morning.

That will be followed by heavy snowfall throughout Thursday morning which will get steadily worse until the weekend.

‘Because we have already had a cold start in December and the first bout of snow, I wouldn’t be surprised if a record is broken this winter,’ said Mr Powell.

‘The lowest temperatures we are predicting at the moment will be -11c in Braemar, near Fort William in Scotland, but with a wind chill of -17, which is how it will actually feel to people there.

‘The record for Scotland is -23 at Braemar in 1919, and I wouldn’t be surprised if that goes this winter.

‘When you get sustained temperature values like this over a long period of time it is ideal conditions for that to happen.

‘I also think it will last until the first few weeks of February when there will be a clean break for Spring, because we look set for an early arrival of Spring this year.’

However, whereas the east of the country bore the brunt of the snow last time out, the weather front will attack the west of the UK this time, with Scotland, Wales and the West and Northern Ireland seeing the worst.

Charles Powell, a forecaster for the Met Office, said: ‘We have got early warnings out for Thursday and Friday.

‘Whereas a couple of weeks ago the main risk was in the eastern part of the country, this time the western side is most at risk.

‘We are fairly certain that the western side will see some snowfall.’

Four inches of snow is expected over almost all of the UK, with up to eight inches in the worst hit parts of Scotland by Friday evening.

If there is good news to be had, it is that the temperature won’t actually get as low as the -99C that showed up over Cornwall on a BBC weather map on News24 yesterday – it made forecaster Daniel Corbett’s face turn white.

But the news that the weather will be treacherous for the last shopping weekend before Christmas will be a blow to retailers.

The freezing and icy conditions earlier this month kept shoppers at home and got traders off to a poor start to December but the tills began ringing as the thaw set in.

Sarah Cordey, from the British Retail Consortium, said: ‘In places where there’s been severe weather it has disrupted sales.

‘Retailers are hoping shopping which wasn’t done earlier in the month will still be done between now and Christmas.

‘The indications are that stores are catching up.

‘The milder weather has brought Christmas shoppers flooding into stores, which have been busier than would normally be expected even for this time of year.

‘Retailers are also pinning their hopes on a bumper final weekend.

‘Extreme weather might be changing week-by-week spending patterns, but chances are that sales in December overall will be very similar to usual and there will be minimal impact on figures for the month as a whole.

‘Clearly retailers don’t want a repeat performance of the widespread snowfall which happened at the beginning of December, which would be a bad thing at this critical time.’

The approaching weather has also brought new fears for the Royal Society for the Protection of Birds (RSPB), which today warned that the prolonged cold winter has already had ‘serious conservation implications’ because it has led to Barn owls starving to death.

Freezing conditions make finding food almost impossible so the birds are starving in their roosts and a spokesman warned the impending second big freeze will make the situation worse.

Mark Thomas, RSPB investigations officer, said: ‘We have been receiving a growing number of calls from people who have discovered dead barn owls in recent days and we believe it’s because they are starving in the cold weather as the icy, snowy conditions make their main food sources like voles and mice much harder to find.

‘Although practically there is little that can be done to supplement the diets of barn owls, farmers and members of the public are encouraged to remain vigilant and report any sick or injured looking owls to a wildlife rescue centre immediately.

‘It’s very distressing for both the birds and the people who discover them, as they are beautiful and charismatic species of the British countryside.

‘Prompt action could save the life of a starving bird and once they’ve been fed up they should soon be fit for release back in the original location.’