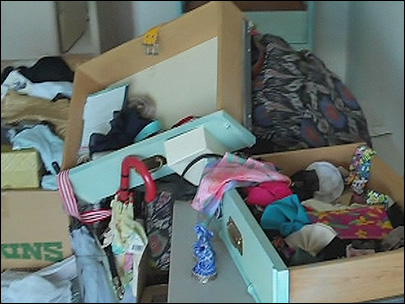 SEATTLE — J.D. Butler was on his death bed when JP Morgan Chase invaded his home, according to his daughter, who said the intrusion left the waterfront home in shambles.

Celeste Butler says she couldn’t get any answers from Chase, so her only option was to sue.

“I’m praying and hoping that this never happens to anyone else again,” she said.

Butler says she took home video to document what happened to her father’s waterfront home, which was ransacked while he fought for his life in the hospital. Drawers were turned upside down, and a locked china cabinet was broken into.

Items that had been collected during a lifetime of service in the U.S. Navy were destroyed.

“When I left this house, everything was neat and clean in this room,” said Celeste.

“One of the terms in the mortgage papers is that the bank has the right to enter the property if it appears that the home is abandoned, so we believe that this event was orchestrated by the bank to allow the bank to initiate action against the Butler home,” said Chris Davis, Celeste’s attorney.

Chase says J.D. had fallen behind in payments. And if a loan is delinquent, Chase says it has the right to enter a house.

“We followed our policy to maintain a mortgaged property, especially during winter months when cold weather can damage property,” Chase said.

The contractor Chase hired left orange stickers where the plumbing had been winterized. The mortgage company insists the house was disorganized when it initially checked on it.

But Celeste insists the payments had been made, and the Port Angeles house was neat when she left it.

“And the bank told me the mortgage was current,” she said.

Now a court will have to decide who is in the right.

Celeste’s father died in January. Her lawsuit claims Chase and its contractors unlawfully entered the house and caused her emotional stress.

“It’s shocking because you don’t expect a bank with a good reputation like Chase to be involved in this sort of thing,” Davis said.

“It’s pretty terrible when this happens to you lose a lot of things, so yeah, I’m praying and hoping that this never happens to anyone again,” said Celeste.

Butler is now selling the house her father left behind. Her lawsuit, filed in King County, seeks unspecified damages from Chase and two contractors.