Shivering Britain can expect at least another month of bitterly cold temperatures with many parts failing to get much above zero until the middle of January, forecasters have warned. 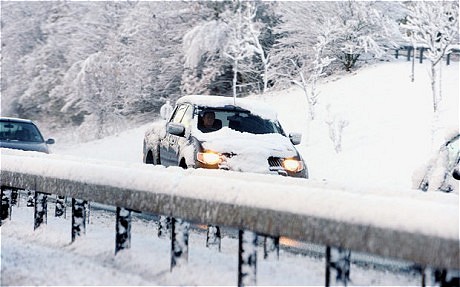 So far December has seen some of the coldest temperatures and heaviest snowfalls since 1981, but with no let up on the horizon, it could end up being the worst winter since 1910.

Parts of northern England and central Scotland have seen lows of (0F) -18C while the mercury has continued to drop in the south.

But apart from a brief respite over the coming weekend, when temperatures are expected to climb slightly, the cold snap is likely to continue throughout Christmas and well into January.

Drivers are being warned to remain vigilant and cautious as many road surfaces will be icy and treacherous for many weeks to come.

Helen Chivers from the Met Office said: “Temperatures are likely to remain low for at least another 30 days. Daytime temperatures may only reach as 37F (3C) to 41F (5C) and at night we will see the average well below zero in many parts.

“At this stage it is difficult to say whether they will be significant snowfall but the temperature will certainly be cold enough.

“The average temperatures for this time of year could be expected to be as high as 48F (9C) in places like London and 45F (7C) in Scotland so the figures are well down on what is usual.”

In Scotland, where heavy snow has brought chaos, the armed forces have been drafted in to help with the clear up.

Two hundred soldiers from the Royal Scots Borderers, 1st Battalion The Royal Regiment of Scotland cleared snow and ice from roads and pavements around Edinburgh.

Teams of offenders on community service more used to removing graffiti have been redirected to snow clearing duties.

In one Cornish town, council workers were banned from helping to clear pavements due to fears someone could slip on the ice and sue them.

Helston Town Council staff were advised not to lend a hand because they have not been trained to do so.

They were warned if someone fell where a council employee had undertaken some work the council could be liable for any injuries suffered.