Why is it that all leaked information supports the elitist agenda? 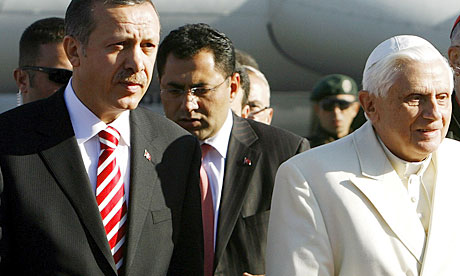 The pope is responsible for the Vatican’s growing hostility towards Turkey joining the EU, previously secret cables sent from the US embassy to the Holy See in Rome claim.

In 2004 Cardinal Ratzinger, the future pope, spoke out against letting a Muslim state join, although at the time the Vatican was formally neutral on the question.

The Vatican’s acting foreign minister, Monsignor Pietro Parolin, responded by telling US diplomats that Ratzinger’s comments were his own rather than the official Vatican position.

The cable released by WikiLeaks shows that Ratzinger was the leading voice behind the Holy See’s unsuccessful drive to secure a reference to Europe’s “Christian roots” in the EU constitution. The US diplomat noted that Ratzinger “clearly understands that allowing a Muslim country into the EU would further weaken his case for Europe’s Christian foundations”.

But by 2006 Parolin was working for Ratzinger, now Pope Benedict XVI, and his tone had distinctly chilled. “Neither the pope nor the Vatican have endorsed Turkey’s EU membership per se,” he told the American charge d’affaires, “rather, the Holy See has been consistently open to accession, emphasising only that Turkey needs to fulfil the EU’s Copenhagen criteria to take its place in Europe.”

But he did not expect the demands on religious freedom to be fulfilled: “One great fear is that Turkey could enter the EU without having made the necessary advances in religious freedom. [Parolin] insisted that EU members – and the US – continue to press the [Turkish government] on these issues … He said that short of ‘open persecution’, it couldn’t get much worse for the Christian community in Turkey.”

The cables reveal the American government lobbying within Rome and Ankara for Turkish EU membership. “We hope a senior department official can visit the Holy See and encourage them to do more to push a positive message on Turkey and integration,” concluded the 2006 cable.

But by 2009, the American ambassador was briefing in advance of President Barack Obama’s visit, that “the Holy See’s position now is that as a non-EU member the Vatican has no role in promoting or vetoing Turkey’s membership. The Vatican might prefer to see Turkey develop a special relationship short of membership with the EU.”

Roman Catholicism is the only religion in the world with the status of a sovereign state, allowing the pope’s most senior clerics to sit at the top table with world leaders. The cables reveal the Vatican routinely wielding influence through diplomatic channels while sometimes denying it is doing so. The Vatican has diplomatic relations with 177 countries and has used its diplomatic status to lobby the US, United Nations and European Union in a concerted bid to impose its moral agenda through national and international parliaments.

The US charge d’affaires D Brent Hardt told Parolin, his diplomatic counterpart in Rome, of “the Holy See’s potential to influence Catholic countries to support a ban on human cloning” to which Parolin emphasised his agreement with the US position and promised to support fully UN efforts for such a ban.

On other global issues such as climate change, the Vatican sought to use its moral authority as leverage, while refusing itself to sign formal treaties, such as the Copenhagen accord, that require reporting commitments.

At a meeting in January this year Dr Paolo Conversi, the pope’s representative on climate change at the Vatican’s secretariat of state, told an American diplomat that the Vatican would “encourage other countries discreetly to associate themselves with the accord as opportunities arise”.

The Americans noted that Conversi’s offer to support the US, even if discreetly, was significant because the Vatican was often reluctant to appear to compromise its independence and moral authority by associating itself with particular lobbying efforts.

“Even more important than the Vatican’s lobbying assistance, however, is the influence the pope’s guidance can have on public opinion in countries with large Catholic majorities and beyond.”

The cables also reveal that the Vatican planned to use Poland as a trojan horse to spread Catholic family values through the structures of the European Union in Brussels.

The then US ambassador to the Holy See, Francis Rooney, briefed Washington in 2006, shortly after the election of Pope Benedict XVI, that “the Holy See hopes that Poland will hold the line at the EU on ‘life and family’ issues that arise” and would serve as a counterweight to western European secularism once the country had integrated into the EU.

The cable notes that Pope Benedict is preoccupied with Europe’s increasing psychological distance from its Christian roots.

“He has continued to focus on Poland’s potential in combating this trend. This was one of the themes of the visit of several groups of Polish bishops to the Vatican at the end of last year [2005]. ‘It’s a topic that always comes up,’ explained Monsignor Michael Banach, the Holy See minister of foreign affairs country director for Poland. He told us that the two sides recognised that the Polish bishops needed to exert leadership in the face of western European secularism.”

Across the Atlantic, the Vatican has told the Americans it wants to undermine the Venezuelan president, Hugo Chávez, in Latin America because of worries about the deterioration of Catholic power there. It fears Chávez is seriously damaging relations between the Catholic church and the state by identifying the church hierarchy as part of the privileged class.

Monsignor Angelo Accattino, in charge of Caribbean and Andean matters for the Vatican, said Obama should reach out to Cuba “in order to reduce the influence of Chávez and break up his cabal in Latin America“.In December last year, America’s adviser for western Europe at the UN, Robert Smolik, said the Vatican observer was “as always active and influential behind the scenes” and “lobbied actively and influentially in the corridors and in informal consultations, particularly on social issues”.

In 2001 another American diplomat to the Vatican stated: “The Holy See will continue to seek to play a role in the Middle East peace process while denying this intention.” (1792)

– Catholics, It’s You This Freemason-Satanist Pope Has Abused