And now Halliburton is willing to pay $500 million to keep Darth Cheney from being arrested? 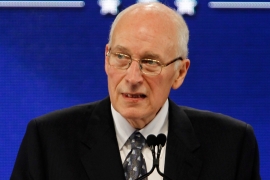 KBR has admitted to bribing officials. Last year the company pleaded guilty in a U.S. federal court to paying the bribes to Nigerian officials prior to 2007, when it was a subsidiary of Halliburton. KBR, which is now independent from Halliburton, agreed to pay $597 million in fines, according to the Associated Press.

However, Halliburton is in talks with Nigerian officials to make a plea bargain in the case, said Femi Babafemi, spokesman for Nigeria’s Economic and Financial Crimes Commission, the agency which has pressed the charges against Cheney.

“The companies are asking for a plea bargain, we are reviewing their request, we are talking with them, but we have not gone far with the talks yet,” Babafemi told GlobalPost.

Although Babafemi did not give further details, other sources within the agency said the plea bargain might involve a $500 million settlement.

Babafemi did not confirm whether the anti-corruption agency will ultimately settle for a plea bargain. But similar deals have been reached with other foreign multinational companies that have recently been charged with corruption in Nigeria.

Cheney and three other top executives could face sentences of three years in a Nigerian prison if convicted of the charges in the 16-count indictment, said Babafemi.

Halliburton and four other firms allegedly paid the bribes to win a contract to build a liquefied natural gas plant in Nigeria’s oil-rich southern delta.

In addition to Halliburton, the four companies to face charges are KBR, which is now based in Houston, Texas; Technip SA, Europe’s second-largest oilfield services provider; Eni SpA, Italy’s biggest oil company; and Saipem Construction Co., a unit of Eni.

All the individuals named in the case are former and current executives of those companies.

Other multinational firms that have made plea bargains include Julius Berger, the Nigerian subsidiary of Bilfinger Berger AG of Germany, which had also been named in the same case as Halliburton. That firm has already paid $26 million to have the charges against it dropped.

Last month, Siemens AG, Europe’s largest engineering company, agreed to pay $46.5 million to settle charges that it had bribed some Nigerian officials with 17.5 million euros in return for contracts.

Uche Onyeagocha, a Nigerian lawyer, said it is very likely the terms of the plea bargain will cover all the officials being charged, including Cheney.

“A plea bargain does not exist under the Nigerian law, so in this case the companies will have the opportunity of protecting their interest,” Onyeagocha said.

The possibility that the five companies together with their former and current officials could escape trial through a plea bargain has angered some Nigerian anti-corruption groups.

“There cannot be an out of court settlement. In a purely criminal matter like this, the full letters of the law should apply,” Adetokunbo Mumuni, an anti-corruption campaigner, said. “Whoever is involved should be taken through the entire process to determine their guilt or not.”

He insisted that caution should be exercised to stop the former vice president’s prominence from overshadowing the main issue.

“The issue should not be so much about the former U.S. vice president, it should be to what extent the law will be properly applied,” Mumuni said.

The Halliburton case is part of a growing number of corruption allegations brought against western companies operating in Nigeria. These have included Royal Dutch Shell and a major Swiss freight company, Panalpina Welttransport. The Swiss company is being investigated in connection with illegal payments it allegedly made to Nigerian customs officials on behalf of Shell.

Although Nigeria has long had a reputation for being corrupt itself, anti-corruption campaigners said these new charges shed light on the destructive role that major multinational firms play.

“What we are seeing shows how western multinational companies are fueling corruption in countries like Nigeria. They are perpetrating crimes they cannot commit back home,” said Philip Jakpor, a spokesman for Environmental Rights Action, the Nigerian affiliate of Friends of Earth, a nongovernmental organization.

On the streets of Lago, Nigeria’s capital, the charges against Cheney have sparked a lively debate.

In the midst of an intense argument at a crowded newsstand in Agege, a Lagos suburb, Tope Olawale, an electrician, said he doubted Cheney would appear in a Nigerian court to face corruption charges.

Olawale said the United States would not allow its former vice president to go to court in Nigeria.

“America will not mind starting a war against Nigeria, if only to stop its former vice president from being tried in a Nigerian court,” he said.