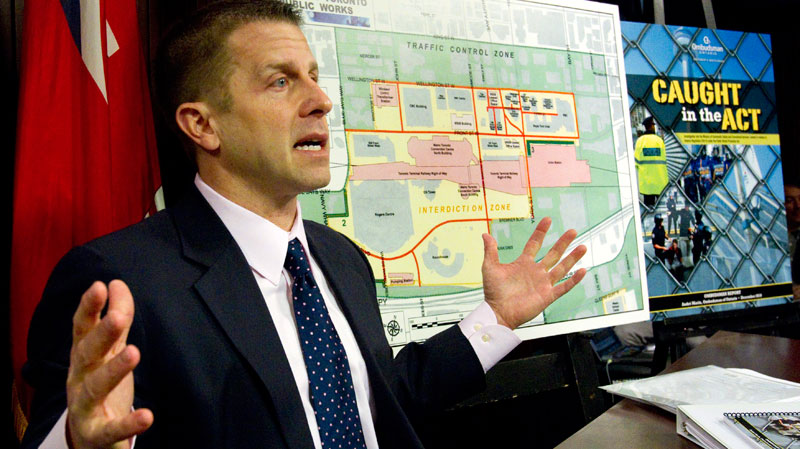 “Here in 2010 is the province of Ontario conferring wartime powers on police officers in peacetime.”

He said the provincial government has indicated it will act on his main recommendation: revising or repealing the Public Works Protection Act, which dates back to the late 1930s.

The authorities used that act to develop a security plan for the summit, held at the Metro Toronto Convention Centre in the heart of downtown this summer.

That act was introduced shortly after Canada joined the Second World War, as part of an effort to protect public works infrastructure in Ontario by allowing police to question and search people near dams or electricity plants, as two examples.

The so-called “five-metre rule” was never publicized until after the G20 summit, held on June 26 and 27, had ended.

Marin said it should have been aggressively publicized.

“Perversely, by changing the rules of the game without real notice, Regulation 233/10 acted as a trap for the responsible — those who took the time to educate themselves about police powers before setting out to express legitimate political dissent,” he said in his report Tuesday.

The regulation was initially interpreted as allowing police to arrest anyone who came within five metres of the fence that ringed the G20 zone, and who refused to produce identification or allow themselves to be searched.

However, it should have only applied to people inside the security zone.

Marin said the regulation was really about expanding police powers at the three access points through the security perimeter that ringed the meeting site, and not protecting infrastructure. It did so by designating those gaps as public works.

Marin said this was probably illegal. “Nowhere does the Public Works Protection Act authorize the government to enact a regulation to protect people rather than places,” he said.

“Apart from insiders in the government of Ontario, only members of the Toronto Police Service knew that the rules of the game had changed, and they were the ones holding the ‘go directly to jail’ cards,” Marin wrote in his report.

Asked on June 29 if there was such a ‘five-metre’ rule, Toronto’s Police Chief Bill Blair said, “No, but I was trying to keep the criminals out.”

Blair has said he received clarification on the rule on June 25, but Marin said that didn’t solve the problem.

“Throughout the weekend of the G20 summit, police exercised their powers under the Act well beyond the limits of the security perimeter, even after the misinterpretation on the part of the chief of the Toronto Police Service had been corrected,” he said.

Blair didn’t co-operate with the review and declined to allow Toronto police officers to be interviewed, Marin said.

Blair had been acting on advice from lawyers. When the lawyers said they were incorrect in their interpretation, Blair amended his order to his front-line officers, Pugash said.

Marin received almost 170 complaints from the public over the law. In response, he launched a review.

The Ministry of Community Safety and Correctional Services didn’t have bad intentions, but the government didn’t find the right balance with respect to people’s right to express legitimate dissent, he said.

Marin said if the government wants to use such a law to protect people and not infrastructure, it should clearly be spelled out.

He also wants the government to publicize when police powers have been modified by legislation, “particularly in protest situations.”

Jim Bradley, the current community safety and corrections minister, agreed the government should have done a better job of communicating the law. But he declined to either apologize for any breaches of civil rights that may have resulted or to say the Liberal government had acted in secret.

In a statement released Tuesday afternoon, the Toronto Police Services Board issued a statement that it has commissioned an independent civilian review, which is currently underway.

The board supports the various reviews of G20 policing “and is satisfied that the Toronto Police Service, too, has extended similar support,” it said.

The Ontario NDP say a full public inquiry is needed, but the Progressive Conservatives said one wouldn’t be necessary if the government answered questions and had former community safety minister Rick Bartolucci resign from cabinet.