– Meet The 35 Foreign Banks That Got Bailed Out By The Fed (And This Is Just The CPFF Banks) (ZeroHedge):

One may be forgiven to believe that via its FX liquidity swap lines the Fed only bailed out foreign Central Banks, which in turn took the money and funded their own banks. It turns out that is only half the story: we now know the Fed also acted in a secondary bail out capacity, providing over $350 billion in short term funding exclusively to 35 foreign banks, of which the biggest beneficiaries were UBS, Dexia and BNP. Since the funding provided was in the form of ultra-short maturity commercial paper it was essentially equivalent to cash funding. In other words, between October 27, 2008 and August 6, 2009, the Fed spent $350 billion in taxpayer funds to save 35 foreign banks. And here people are wondering if the Fed will ever allow stocks to drop: it is now more than obvious that with all banks leveraging the equity exposure to the point where a market decline would likely start a Lehman-type domino, there is no way that the Brian Sack-led team of traders will allow stocks to drop ever… Until such time nature reasserts itself, the market collapses without GETCO or the PPT being able to catch it, and the Fed is finally wiped out in one way or another. 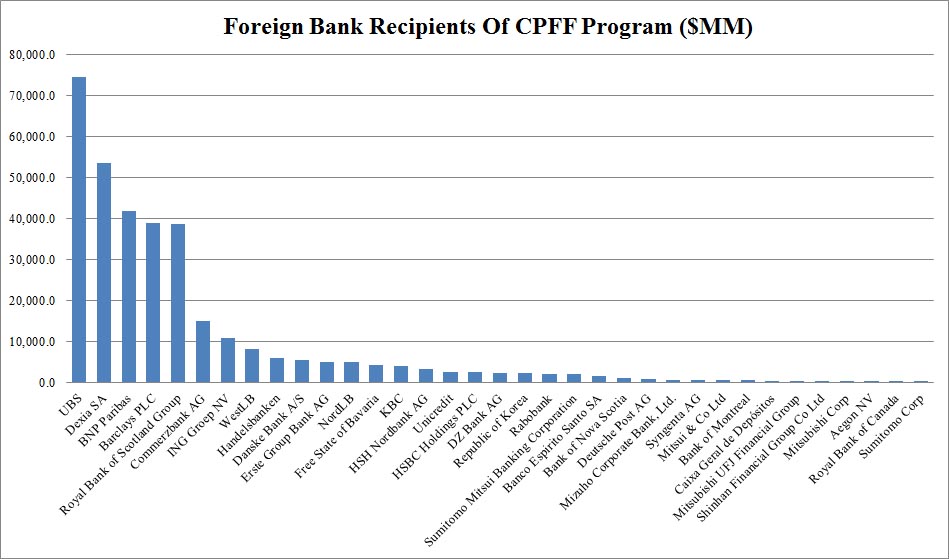 The 35 companies in question: