… and a short history of fiat currencies: 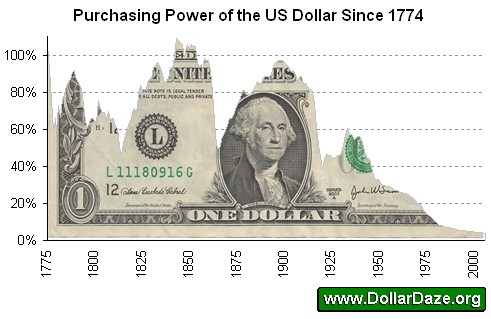 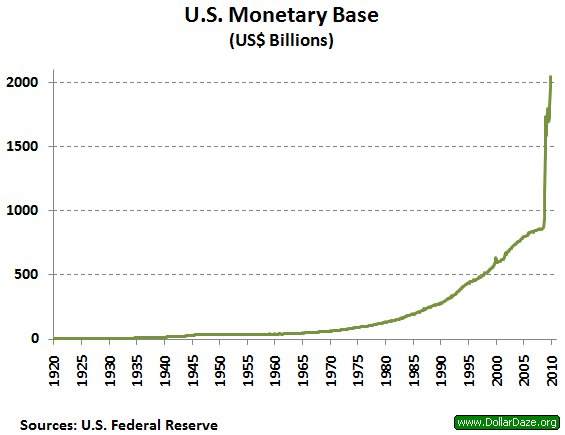 And soon one dollar will be completely worthless.

From 3600 BC to the present day, from deep underground to outer space, gold has been a major factor in the world’s development and economy. 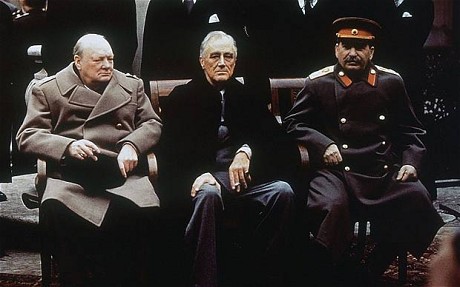 Franklin Roosevelt, pictured with Winston Churchill and Josef Stalin, suspended US dollar convertibility to gold in 1933

Egyptian goldsmiths carry out the first melting or fusing of ores in order to separate the metals inside. They use blowpipes made from fire-resistant clay to heat the smelting furnace.

Goldsmiths of ancient Mesopotamia (modern-day Iraq) craft one of the earliest pieces of gold jewellery, a burial headdress of lapis and carnelian beads with willow leaf-shaped gold pendants.

1223 BC – Creation of Tutankhamun’s funeral mask

Instantly recognised the world over, the funeral mask of Tutankhamun is a triumph of gold craftsmanship from the ancient world.

The world’s first hallmarking system, scrutinising and guaranteeing the quality of precious metal, is established at Goldsmith’s Hall in London – where London’s Assay Office is still located today.

During the years 1370-1420, various major mines around Europe become completely exhausted. Mining and production of gold declines sharply throughout the region in a period known as ‘The Great Bullion Famine’.

Britain moves onto a de facto pure gold standard, as the government links the currency to gold at a fixed rate (establishing a mint price of 77 shillings, 10-and-a-half pennies per ounce of gold).

John Marshall discovers gold flakes while building a sawmill near Sacramento, California. The greatest gold rush of all time follows as 40,000 diggers flock to California from around the world.

While digging up stones to build a house, Australian miner George Harrison finds gold ore on Langlaagte farm near Johannesburg. Miners flock to the region. South Africa will go on to become the source of 40pc of the world’s gold.

All major countries other than China switch to the gold standard, linking their currencies to gold. The practice of bimetallism is abandoned.

The UK returns to the gold standard at pre-war parity of $4.86=£1 with sterling convertible to gold at 77sh 10.5d per standard ounce. This follows the country’s departure from the gold standard six years previously at the outbreak of the First World War.

President Roosevelt suspends US dollar convertibility to gold (gold at US$20.67/oz). The export of all transactions in, and the holding of gold by private individuals, is forbidden. Presidential proclamation makes the dollar convertible again in January 1934 at a new price of $35 per troy ounce.

The London gold market is closed on the outbreak of war, as at the beginning of the Second World War. The world will later return to a fixed system of exchange rates, this time with currencies fixed to the dollar and the dollar convertible into gold.

The Krugerrand is introduced in 1967, as a vehicle for private ownership of gold. This iconic coin is actually intended for circulation as currency.

The Bretton Woods system of fixed exchange rates comes to an end as President Nixon “closes the gold window”, suspending US dollar convertibility to gold. The world enters its present day system of floating exchange rates.

The First Central Bank Gold Agreement (CBGA) is agreed. 15 European central banks declare that gold will remain an important element of their reserves and collectively cap gold sales at 400 tonnes per year over next five years.

The market is transformed by an innovative, secure and easy way to access the gold market. Seven years later SPDR exceeds $55bn in assets under management.

In the second quarter of the year, central banks collectively become net purchasers of gold for the first time in two decades. This reflects a combination of slowing sales from European banks and growing purchases by emerging market countries.

1 thought on “A History of Gold”