Land of the free!

Employees unable to call up WikiLeaks on government computers as material is still formally classified, says US 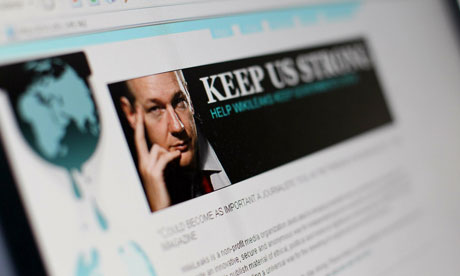 WikiLeaks has been blocked from being accessed by federal employees of the US, because the files are still seen as classified. Photograph: Thomas Coex/AFP/Getty Images

The Obama administration is banning hundreds of thousands of federal employees from calling up the WikiLeaks site on government computers because the leaked material is still formally regarded as classified.

The Library of Congress tonight joined the education department, the commerce department and other government agencies in confirming that the ban is in place.

Although thousands of leaked cables are freely available on the Guardian, New York Times and other newspaper websites, as well as the WikiLeaks site, the Obama administration insists they are still classified and, as such, have to be protected.

The move comes at a time when civil rights and other liberal groups are becoming increasingly critical, inviting parallels with the kind of bans on information imposed by China and other oppressive governments.

The Library of Congress, one of the biggest libraries in the world, serving both Congress and the public, and essentially the library of record for the US, issued a statement tonight, which read: “The library decided to block WikiLeaks because applicable law obligates federal agencies to protect classified information. Unauthorised disclosures of classified documents do not alter the documents’ classified status or automatically result in declassification of the documents.”

Disclosure of the ban brought a flood of criticism from liberal bloggers, critical of the Library of Congress’s behaviour.

News of the ban was first reported by the Washington Post.

The commerce department, in an email circulated to employees on Monday, said the WikiLeaks material remained classified and “is NOT authorised for downloading, viewing, printing, processing, copying or transmitting” on government computers or communication devices.

It warned anyone downloading the WikiLeaks material: “Accessing the WikiLeaks documents will lead to sanitisation of your PC to remove any potentially classified information from your system, and the result in possible data loss.”

The education department said any employees who had already looked at the material should contact their internet technology department. An internal email said that IT staff “will work with you to remediate your device”.