Now the ECB wants to resort to the ‘nuclear option’ like the Federal Reserve banksters and only Germany objects to the  QE (quantitative easing) madness?

The fallout from the ‘nuclear option’ is called inflation!

The  real intend behind those policies is to destroy the middle class and the poor, making the rich even richer.

Germany just doesn’t want to burn in the hell of Weimar again.

– Angela Merkel: ‘If this is the sort of club the euro is becoming, perhaps Germany should leave’

The European Central Bank has rebuffed calls for mass purchases of southern European bonds, despite growing pressure from Spain and Italy for dramatic action to buttress monetary union. 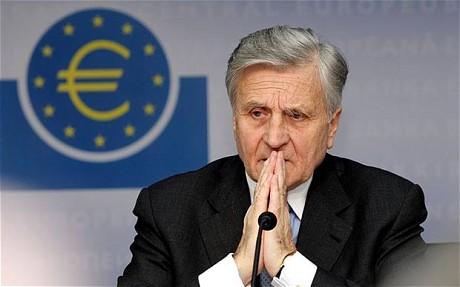 Jean-Claude Trichet, the ECB’s president, said emergency lending support for eurozone banks would be extended until at least April next year

Jean-Claude Trichet, the ECB’s president, said emergency lending support for eurozone banks would be extended until at least April next year, citing “acute tensions” in the market.

The delay removes the risk that Frankurt might soon pull away the prop holding up the Irish and Greek banking systems, as well as the Spanish cajas – or savings banks – and the sovereign states behind them. Traders say the ECB intervened directly in the weakest bond markets on Thursday to drive down yields and calm nerves.

However, Mr Trichet said there had been no decision to step up purchases of peripheral bonds to a whole new level – the so-called “nuclear option” – despite the potentially dangerous rise in Spanish, Italian, Belgian and even French yields over the past three weeks.

Some credit market analysts had speculated that the ECB might launch a blitz of €1 trillion to €2 trillion of debt purchases, but this was never likely at this stage. Such action is anathema to Germany.

Rainer Bruderle, the German economy minister, spelled out Berlin’s objections on Thursday just hours before the ECB meeting, insisting that “the permanent printing of money is not a solution”.

A chorus of influential voices in Germany has warned that any attempt by the ECB to prop up Club Med with loose money would be a grave error, undermining German political support for monetary union.

“It would be fatal if the ECB was to squander its credibility,” said Klaus Zimmerman, head of the DIW German Economic Research Institute. He said the bank is the last bastion of credibility after the serial breach of EU fiscal and debt rules.

“Broader purchases of the distressed eurozone debt would calm speculation for a short time, but would just invite risk-taking by investors in general,” he said.

Thomas Mayer from Deutsche Bank said that if the ECB is put in a position of having to buy up to €2 trillion of debt to support Spain and Italy, it will cross a ruinous line. “If the ECB is thrown into the fire, who knows what will happen,” he said.

Separately, key figures from the major parties on the Bundestag’s finance committee renewed calls for debt restructuring for Greece, Ireland and Portugal, with “haircuts” for creditors.

Lothar Binding from the Social Democrats said it was becoming “very difficult” to keep explaining to taxpayers why they should provide fresh money to these countries at a time of welfare cuts at home. He warned that the chasm between Europe’s northern and southern nations had grown impossibly wide and that sooner or later the common currency might have to split in two.

Julian Callow from Barclays said the ECB is caught between irreconcilable pressures from Germany and Europe’s high-debt states. “The ECB has to be very careful. The more bonds it buys from the eurozone periphery, the more clearly they are circumventing the EU’s ‘no bail-out’ clause. This is unconstitutional in Germany, which is why the EU had to come up with the complicated arrangement of a bail-out fund working with the IMF,” he said.

The ECB is already facing a complaint at the German constitutional court over the €67bn of Greek, Irish and Portuguese bonds that it has bought so far. A ruling is expected in February.

Mr Callow said EU leaders need to think in entirely different terms, using the European Investment Bank to launch a “New Deal” of infrastructure and investment projects in stricken states. There is no treaty law against this, and it would help pull them out of debt-deflation traps and a self-defeating cycle of austerity that erodes their ability to grow back to health.

What is at stake politically for Germany is whether the ECB will remain faithful to the legacy of the Bundesbank. The German nation gave up its Deutschmark and agreed to share its admired monetary regime under an unspoken but sacred contract that the euro would never lead to disorder or inflation. To breach this contract is to risk a powerful German backlash.

Yet those closer to southern Europe’s frightening funding crisis are afraid that matters will go from bad to worse very quickly unless the ECB pulls out all the stops, despite the market rally on Thursday.

“The ECB must launch a massive purchase of eurozone debt without delay,” said Professor Simon Sosvilla from Madrid’s Complutense University. He will have to wait a few weeks yet.