Germany should have left the euro a long time ago.

Max Keiser: Teutonic Genie out of bottle, America punches itself in face

“We are in a currency war”, says Max Keiser.

60 Percent of Germans Want The Mighty Deutschmark Back 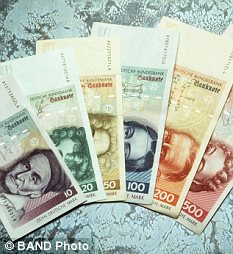 Nearly 60 per cent of Germans want the mighty Deutschmark back

The German chancellor warned her country could pull out of the euro as nations wrangled over the future of the single currency, it has emerged.

Angela Merkel had a row with the Greek prime minister George Papandreou at a summit in October, according to reports.

The Greek leader is said to have branded the German plans to re-open the Lisbon Treaty and establish a permanent bailout fund for debt crises ‘undemocratic’ at the October 28 meeting.

Ms Merkel retorted: ‘If this is the sort of club the euro is becoming, perhaps Germany should leave,’ according to government figures at the dinner.

Her spokesman Steffen Seibert refused to comment on the claims yesterday when contacted by The Guardian but said the threat was ‘not plausible’.

‘The chancellor sees the euro as the central European project, wants to secure and defend it and the government,’ he said. ‘Germany is unconditionally and resolutely committed to the euro.’

The row emerged as a new poll showed nearly 60 percent of Germans wish they had the mighty Deutschmark back in their pockets and purses instead of the euro.

The latest poll for the ARD TV broadcaster also showed that 66 percent of Germans fear that the current financial crisis will torpedo their savings.

While 57 percent want the D-mark back, only 32 percent said they found anything positive about the common currency.

The last euro survey earlier in the year – before Greece and Ireland meltdowns – showed 51 percent wanting the mark back.

And seventy five percent believe that it is the financial markets and not the politicians who will decide the eventual fate of the troubled euro.

This is the highest percentage of Germans wanting the D-mark to return since several polls in the 1990’s showed close to 70 percent of them wanted to retain the currency of the ‘economic miracle.’

The zone’s financial stability is still far from certain and many analysts believe the crisis will worsen before it gets better.

ECB head Jean-Claude Trichet is keeping the pressure on governments to fix the debt crisis as the bank buys bonds to win politicians time to cut deficits.

The bank snapped up Portuguese and Irish bonds again on Friday after Trichet assured investors that policy makers will delay the withdrawal of emergency liquidity.

The ECB’s purchases have triggered a surge in bonds across the euro region’s periphery.

‘Uncertainty is elevated,’ Trichet said after the ECB left its benchmark interest rate at 1 percent. ‘We have tensions and we have to take them into account.’

‘The refusal to be more aggressive reflects a belief at the ECB that Europe’s debt woes can only be solved by governments embracing austerity and that providing more liquidity would only delay the day of reckoning,’ said Peter Dixon, an economist at Commerzbank AG in London.

‘The ECB is effectively putting a sticking plaster over many of the problems in order to ensure that markets continue to function, but this requires governments to sit down and think much more clearly.’

Meanwhile in Germany, the driving force a decade ago for the euro, the survey is yet another blow to confidence and comes as Germany’s foreign ministry is planning a PR offensive to repair the damage to Berlin’s image.

‘Once again, Germany’s image has worsened significantly as a result of our position on combating the euro financial crisis in some EU member states,’ read an analysis, prepared recently by the ministry.

The authors warned forcefully: ‘The goal of the federal government must be to promptly and permanently dispel doubts as to its European orientation.’ Now it plans a PR blitz ‘to increase the acceptance of Germany’s future European policy decisions.’

Many Germans who embraced the EU after WW2, seeing it as a way to preserve peace and forge new business opportunities, now view it as a vast, unaccountable, bloated bureaucracy that stole their beloved D-mark and gave them the struggling euro.

The recent crises in Greece and Ireland have contributed to further disillusion among them.

The euro is now known in Germany as the ‘Teuro’ – a play on the word Teuer meaning expensive.

A longing for the return of the mark, replaced on paper in 1999 and as physical notes and coins in 2002, is prevalent in both east and west Germany.

Rumours circulating in Germany and abroad that the Bundesbank was secretly re-printing marks in case the euro collapsed have been proved false.

But the country’s affection for the old currency is as strong as ever – Germans still hoard an estimated £5.5 billion worth of marks in their homes, based on the old exchange that three marks was worth £1.

These are Bundesbank figures and there could be more of them. They are comfort blankets, reminders of a time and a place when Weimar, inflation, Hitler, wars and ruin stained the nation.

‘It shouldn’t be that surprising,’ wrote a commentator on the Deutsche Welle German TV website.

‘Germans were never that thrilled about the new money anyway. They had a deep emotional connection to their deutschmark.’
This continuing sentimental attachment to a currency that was the building block of the post-war economic miracle is an embarrassment to the political elite that foisted the euro on Germany without any referendum or consultation.

Germany spent billions in campaigning for the euro, on its introduction and on a campaign persuading the public it was a good thing.

That such a majority now favour its farewell is sending new shock waves through the Merkel-led coalition government, already trailing badly in opinion polls.

Most Germans still calculate prices in their heads in marks.

They nurture their resentment against the hated currency with venom and it is a ‘constant source of irritation,’ said a commentator on Radio Berlin this week.

The great fear for Angela Merkel now is an anti-EU party coming to the fore because she knows it will have traction and could draw away 20 percent of the vote from her conservative CDU party.

2 thoughts on “Angela Merkel: ‘If this is the sort of club the euro is becoming, perhaps Germany should leave’”