Vaccines and amalgam fillings that are loaded with mercury, fluorinated drinking water like in the Russian gulags and the Nazi concentration camps to make people docile and infertile and anti-depressants like Prozac, whose main ingredient is also fluoride, …

The list of intentional contamination of the people goes on and on.

– California Approves One Of The World’s Most Dangerous Cancer Chemicals As Pesticide: 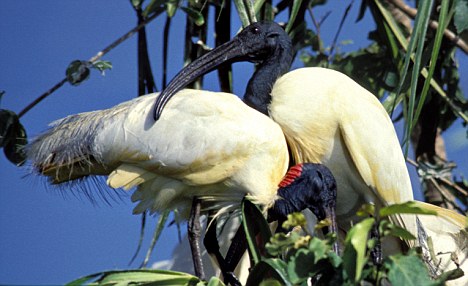 Close bond: The white Ibis is one of the birds that is being badly affected by mercury in its diet, new research has shown

Water pollution is posing a threat to bird ­populations by causing males to mate with each other.

They found that even relatively low levels of methylmercury in the diet of male white ibises caused the birds to pair up with each other, snubbing females.

As a result fewer females breed and fewer chicks are produced.

Methylmercury is a form of mercury – the metal which is liquid at room temperature and is better known as quicksilver. It has been seeping into groundwater from ­industry for years.

This is the first scientific study to show how the pollutant appears to alter sexual preference.

The birds were split into four groups. One group ate food with 0.3  parts per ­million (ppm) methylmercury, which most U.S. states would regard as too high for human consumption.

A second group was fed 0.1 ppm, and the third 0.05 ppm, a low dose that wild birds would be exposed to frequently. The fourth group received food clear of the poison.

All three dosed groups had significantly more homosexual males than the control group. Male-male pairs courted, built nests together and paired off for several weeks.

Higher doses increased the effect, with 55 per cent of males in the 0.3 ppm group affected.

Overall, male-male mating was blamed for 81 per cent of unproductive nests in the dosed groups.

‘But we didn’t expect this. In the worst-case scenario, the production of young would fall by 50 per cent.’ Other birds would probably be similarly affected, he said.

However, Dr Frederick, of the Florida University, and fellow researcher Nilmini Jayasena, of the Peradeniya University, Sri Lanka, admitted it was far from clear if methylmercury could be linked to similar effects in mammals.