“It’s unprecedented in Europe that a government is threatening to kick its own citizens out of the state pension system,” Zoltan Torok, a Budapest-based economist at Raiffeisen Bank International AG.

“This is open blackmail,” Julianna Baba, president of the Stabilitas Penztarszovetseg, which groups private pension funds, said in a phone interview today. “It’s a rigged deal.”

George Carlin would say: “They are coming for your f$$$ing retirement money!”

Hungary Follows Argentina in Pension-Fund Ultimatum, `Nightmare’ for Some 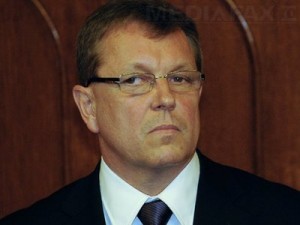 Hungary is giving its citizens an ultimatum: move your private-pension fund assets to the state or lose your state pension.

Economy Minister Gyorgy Matolcsy announced the policy yesterday, escalating a government drive to bring 3 trillion forint ($14.6 billion) of privately managed pension assets under state control to reduce the budget deficit and public debt. Workers who opt against returning to the state system stand to lose 70 percent of their pension claim.

“This is effectively a nationalization of private pension funds,” David Nemeth, an economist at ING Groep NV in Budapest, said in a phone interview. “It’s the nightmare scenario.”

Hungary is rolling back pension changes implemented more than a decade ago as countries from Poland to Lithuania find themselves squeezed by policies designed to limit long-term liabilities by shifting workers into private funds. Now the cost is swelling debt and deficit levels at a time when the European Union is demanding greater fiscal discipline.

Hungary, the most indebted eastern member of the EU, is following the example of Argentina, which in 2001 confiscated about $3.2 billion of pension savings before the country stopped servicing its debt. The government in Buenos Aires nationalized the $24 billion industry two years ago to compensate for falling tax revenue after a 2005 debt restructuring.

Hungary failed to sell the planned amount of debt at an auction today as the forint weakened and bond yields climbed to higher than in June, when the country roiled world markets by raising the specter of default. Yields may rise “quite significantly” as the exit of private pension funds will lead to dropping demand for local debt, Attila Eszes, a bond trader at KBC Groep NV in Budapest, said in a phone interview.

Prime Minister Viktor Orban plans to use pension funds to pay current government pensions and reduce debt as he seeks to cut the budget deficit to less than the EU limit of 3 percent of gross domestic product next year from a targeted 3.8 percent this year. The bloc last month rebuffed a request from nine members, including Hungary, Poland and Sweden, to discount deficit figures by the amount shifted to private managers.

“There is a huge hole in the state pension system fund,” Matolcsy told reporters in Parliament. “The government fund’s revenue from pension contributions is 900 billion forint less than its expenditure. This is unsustainable.”

In 1998, Hungary required workers to put a portion of their pension contributions into privately managed funds that were designed to supplement state pensions. Today, about 3 million people have money in the private plans.

The funds’ assets will be automatically shifted to the state system on Jan. 31, unless members specifically opt out. Those who decide to remain in the private funds will lose their government pension after future contributions even as the state will continue to claim 70 percent of pension contributions paid after the individual, Matolcsy said.

“This is open blackmail,” Julianna Baba, president of the Stabilitas Penztarszovetseg, which groups private pension funds, said in a phone interview today. “It’s a rigged deal.”

The association is filing a motion at the Constitutional Court to have the law annulled. It says the pension fund plan violates constitutional guarantees against discrimination, for the rule of law, social security, the defense of property and human dignity.

Other eastern EU members are also seeking to cut deficits with the help of pension funds.

The plan is “one of these ideas that guarantee safety of future pensioners and the budget without a revolution in the pension system,” Tusk said in parliament. “A concrete proposal will be presented next week.”

In Bulgaria, private vocational pension funds will put 20 percent of their assets under state control to cover early retirement until 2014 to curb a widening deficit. This amounts to 100 million lev, or $68 million. Such retirement funds cover about 100,000 workers in specific professions who are forced to retire early.

Hungary’s pension changes are making the country more risky for investors, according to market reactions to the government’s plan. The forint weakened 2.1 percent versus the euro so far this month, making it the world’s worst-performing currency for that period.

The government today sold 30 billion forint of 12-month Treasury bills, 10 billion forint less than planned, as the average yield rose to 6.05 percent from 5.94 percent at the previous auction on two weeks ago. Government bonds tumbled, lifting the yield on the forint note on the benchmark 10-year bond to 7.81 percent at 2:42 p.m., the highest since June 7. Bond yields move inversely to the price.

“The pension system changes will increase long-term risks, while short-term gains such as lower public debt and deficit will prove illusory, if the economy stays weak,” Michal Dybula, an economist at BNP Paribas in Warsaw said in an e-mailed note. “The proposed changes on pensions also increase the risk of rating downgrades, since Hungary’s structural fiscal position will not improve.”

In Hungary, employers set aside 24 percent of each worker’s salary for pension contributions and employees are required to pay 10 percent. Forcing workers back into the state system means the government will retain control of all that money, rather than transferring a portion to the private funds.

“It’s unprecedented in Europe that a government is threatening to kick its own citizens out of the state pension system,” Zoltan Torok, a Budapest-based economist at Raiffeisen Bank International AG, said in a phone interview. “It’s probably enough to ensure that no one is going to stay in the private pension fund system in his or her right mind.”