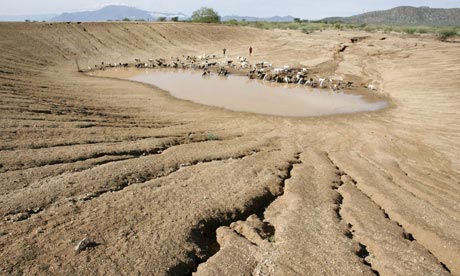 A hellish vision of a world warmed by 4C within a lifetime has been set out by an international team of scientists, who say the agonisingly slow progress of the global climate change talks that restart in Mexico today makes the so-called safe limit of 2C impossible to keep. A 4C rise in the planet’s temperature would see severe droughts across the world and millions of migrants seeking refuge as their food supplies collapse.

“There is now little to no chance of maintaining the rise in global surface temperature at below 2C, despite repeated high-level statements to the contrary,” said Kevin Anderson, from the University of Manchester, who with colleague Alice Bows contributed research to a special collection of Royal Society journal papers published tomorrow. “Moreover, the impacts associated with 2C have been revised upwards so that 2C now represents the threshold [of] extremely dangerous climate change.”

The new analysis by Anderson and Bows takes account of the non-binding pledges made by countries in the Copenhagen Accord, the compromise document that emerged from the last major UN climate summit, and the slight dip in greenhouse gas emissions caused by the economic recession. The scientists’ modelling is based on actual tonnes of emissions, not percentage reductions, and separates the predicted emissions of rich and fast-industrialising nations such as China. “2010 represents a political tipping point,” said Anderson, but added in the report: “This paper is not intended as a message of futility, but rather a bare and perhaps brutal assessment of where our ‘rose-tinted’ and well-intentioned approach to climate change has brought us. Real hope and opportunity, if it is to arise at all, will do so from a raw and dispassionate assessment of the scale of the challenge faced by the global community.”

A rise of 4C could be seen as soon as 2060 in a worst case scenario, according to research in the same journal, led by the Met Office’s Richard Betts and first revealed in the Guardian last year. Betts accepts the scenario is extreme but argues it is also plausible given the rapidly rising trend in emissions.

Rachel Warren, at the University of East Anglia, described a 4C world in her research paper: “Drought and desertification would be widespread … There would be a need to shift agricultural cropping to new areas, impinging on [wild] ecosystems. Large-scale adaptation to sea-level rise would be necessary. Human and natural systems would be subject to increasing levels of agricultural pests and diseases, and increases in the frequency and intensity of extreme weather events.”

Warren added: “This world would also rapidly be losing its ecosystem services, owing to large losses in biodiversity, forests, coastal wetlands, mangroves and saltmarshes [and] an acidified and potentially dysfunctional marine ecosystem. In such a 4C world, the limits for human adaptation are likely to be exceeded in many parts of the world.”

Another Met Office study analyses how a 4C rise would differ from a 2C rise, concluding that threats to water supplies are far worse, in particular in southern Europe and north Africa, where regional temperatures would rise 6-8C. The 4C world would also see enhanced warming over most of the US, Canada and northern Asia.

In sub-Saharan Africa, “the prognosis for agriculture and food security in a 4C world is bleak”, according Philip Thornton, of Kenya’s International Livestock Research Institute, who led another research team. He notes there will be an extra billion people populating the continent by 2050.

“Croppers and livestock keepers in sub-Saharan Africa have in the past shown themselves to be highly adaptable to short- and long-term variations in climate. But the kind of changes that would occur in a 4C+ world would be way beyond anything experienced in recent times. It is not difficult to envisage a situation where the adaptive capacity and resilience of hundreds of millions of people could simply be overwhelmed by events,” Thornton’s team concludes.

Another team tackled another complex question: what would happen to humid tropical forests in a 4C world? There was the risk of forest die-off in the Amazon, central America and parts of Africa, but some regions, eg around the Congo basin, would have the potential for forest expansion. The scientist noted, however, that in practice deforestation might be the most important factor.

The speed – as well as the size – of the temperature rise is crucial too, warned scientists from Oxford University, as faster rates of global warming could outpace the ability of human civilisation and the natural world to adapt. “Dangerous climate change depends on how fast the planet is warming up, not just how hot it gets,” said Myles Allen of Oxford University’s department of Pphysics. “It’s not just how much we emit, but how fast we do so.”