Your money is now with the banksters, or better with their elite masters, that also control all governments involved in the financial crisis.

Now the people will be footed with the unpayable bill .

This is not a financial crisis. This is a controlled demolition, total intentional destruction.

Now Ireland has been bankrupted and destroyed. Your country is next.

Major rally against cutbacks by government 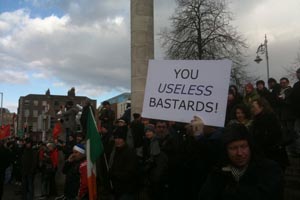 Over 100,000 took to the streets in Ireland protesting the government’s economic policies and their cutbacks on the poor and the elderly.

Organizers claimed over 100,000 but police said only that the crowd exceeded 50,000 and a major rally was held in O’Connell Street.

The protest was organised by the Irish Congress of Trades Unions, who have said the austerity measures are too harsh that are being adopted following the IMF bailout.

The ICTU leadership said: ‘If they go ahead with their plans, they will do irreparable damage and turn this country into a social and economic wasteland.’

Marchers assembled behind the banners of their unions but it appeared many member of the public were also taking part.

March organisers also provided whistles to demonstrators to use as a way to protest.

Three demonstrators sailed down the Liffey in a curragh and flew several banners in support of the marchers.

There is a massive media presence, with camera crews from all over the world present.

Police say they are expecting a peaceful protest, but are poised to handle any trouble.

Chief Superintendent Michael O’Sullivan, said: ‘While our policing plan is primarily focused on crowd safety, it will also aim to prevent any disruption. In addition, we will gather evidence of any unlawful or criminal behaviour which might occur with the intention of bringing those responsible before the courts.”

–  And Now … Ireland: Pension Reserve Funds To Be Spent On The Banksters

Now that is called THE state of the art bank robbery!

Now that the banksters and the government have bankrupted Ireland, the IMF will rape what is left:

The banksters got billions for Christmas and the people will get cheese: