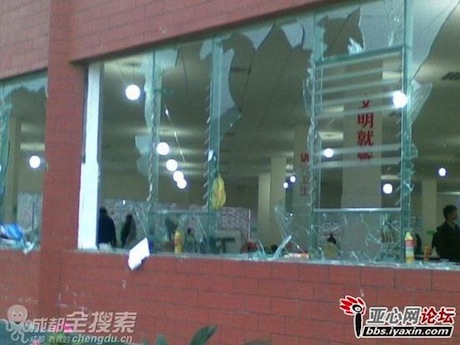 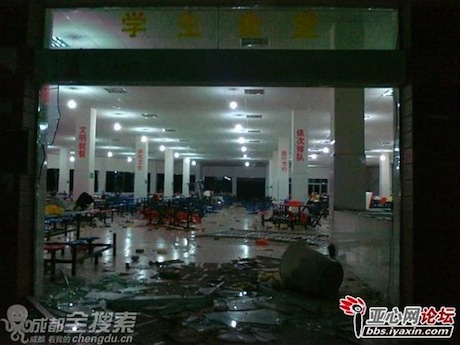 The inside of the trashed student cafeteria

It is generally estimated that there are some 80,000 – 100,000 public protests a year in China, many of them violent and most never reported. I don’t know how useful a measure of true discontent this figure is – after covering India for four years, I expect they have many more – but one recent protest reported in a Chinese newspaper, Guizhou Metropolis Daily, catches my eye.

The paper reports that a group of Chinese middle school children (aged 15-18) trashed their school cafeteria, smashing windows, breaking tables and (as the pictures show) generally laying waste to the place. The students – the school has 4,000, of whom two-thirds live in school during the week – were persuaded to back to their dormitories only after the police rushed to the café 20 minutes after the rampage began.

I’ve heard of student grumbles in China – about everything from lack of jobs to being forced to give up their summer holidays to attend the parade for the 60th Anniversary of Communist Party rule – but nothing like this. The official cause of the riot, if that’s not too strong a word, was put down to rising prices in the school cafeteria which was sub-contracted to a private company. The price of a litre of hot water had risen by 3p, the price of all dishes, by 5p.

Guizhou, a centre for coal mining and agriculture, is one of China’s poorest provinces which might partly explain the extreme reaction (China is in the grip of food price inflation) but I find it hard to believe that was the sole cause. An administrator at the Liupanshui city No.2 School, whom we spoke to today, said the revolt was also partly due to the “strict management of the students”, since the school is run on almost military lines.

So, perhaps a mutiny from below decks as much as a protest at rising prices but even so, stories like this are a reminder of the why China’s rulers are so anxious to keep the society “harmonious”.