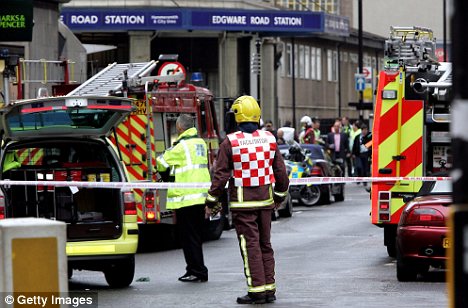 Ministers yesterday lost an appeal to let MI5 give evidence about the July 7 bombings in secret.

Mrs May must now decide whether to launch a final appeal. She could also use special powers to classify some top-level intelligence – meaning relatives will still miss out on the full facts.

Some bereaved families want to ask security service officials why they did not follow up leads on plot ringleader Mohammed Sidique Khan and his right-hand man, Shehzad Tanweer.

Security officials argue this questioning would require the disclosure of top secret intelligence files – some of which are still active.

The judges’ decision backs an earlier ruling by 7/7 inquest coroner Lady Justice Hallett, who concluded that she had powers under Rule 17 of the Coroners Rules 1984 to exclude the public from hearings in the interests of national security.

But she ruled that this did not include ‘interested persons’, such as the bereaved relatives, who are legally entitled to be represented at the inquests.

The coroner said the secret documents could be edited to remove names of sources and other confidential information.

‘I am still hopeful that, with full co-operation on all sides, most if not all of the relevant material can and will be put before me in such a way that national security is not threatened,’ she said in her ruling on November 3.

Lawyers for Mrs May and MI5, also known as the Security Service, went to the High Court last week seeking a judicial review of Lady Justice Hallett’s ruling.

They argued that the coroner would not be able to reach accurate conclusions about MI5’s involvement in tracking the 7/7 bombers without seeing the secret evidence, which cannot be revealed in open sessions.

James Eadie QC said: ‘This is not an attempt by the Security Service to avoid or to minimise the scrutiny of their actions by the coroner by citing the need to protect national security. The position is entirely to the contrary.’

Section 17A of the Coroners Act 1988, as amended in 1999, gives the Lord Chancellor power to adjourn an inquest if the death is being investigated by a public inquiry.

This provision was controversially used in the case of Azelle Rodney, 24, who was shot dead by police in London in 2005, after the inquest into his death stalled over the release of secret evidence.

But Mr Eadie said last week there were ‘serious potential practical problems’ with going down this route.

The inquests into the deaths of the 52 innocent people murdered in the 2005 attacks in London are examining alleged failings by police and MI5.

Bereaved families want to ask intelligence officials why they did not follow up plot ringleader Mohammed Sidique Khan and his right-hand man, Shehzad Tanweer, after surveillance officers watched them meeting known terror suspects 17 months before the bombings.

MI5 argues this is both unnecessary and impossible because doing so would require the disclosure of top-secret files.

Liberty legal officer Corinna Ferguson said: ‘The whole point of an inquest is that those most affected by untimely death should have some answers to why it happened and reassurance that lessons will be learned for the future.

‘A secret inquest would have been a contradiction in terms. No one doubts that the security agencies do vital and sensitive work, but they also need to respect the ultimate role of the courts in upholding the rule of law.’

Clifford Tibber, of Anthony Gold Solicitors, representing six bereaved families at the inquests, said the judges’ decision was a ‘further endorsement of the principle of open justice’.

‘It is right that those who lost their loved ones should be able to see and hear all the evidence,’ he said.

‘The Home Secretary’s attempts to introduce secret hearings at inquests have failed twice in Parliament and twice in the courts.

‘It is difficult to understand what information, six years on, is so sensitive and so critical that it can not be made available to the families in some form.’

He added: ‘As we have said many times, our clients just want the Security Service to produce all of the evidence so that the bereaved and the public can learn the truth about what happened, whether lessons have been learned and implemented and whether the bombings could have been prevented.’

A Home Office spokesman said: ‘The Government is committed to co-operating fully with the coroner’s inquiry.

‘Along with many victims’ families, we believe a closed hearing for a small part of the July 7 inquests would be the best way for the coroner to consider as much information as possible. The court has decided this is not possible and we will consider the judgment carefully.’