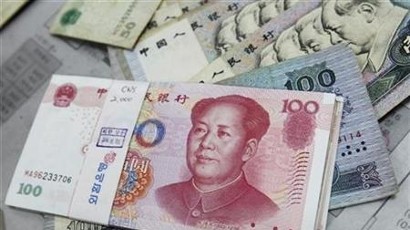 Nov. 23 (Bloomberg) — Standing near his 12-table noodle shop on Beijing’s Yonghegong Avenue, owner Liu Heliang says meat and vegetable prices have climbed 10 percent in a year and staff wages are up 40 percent.

“I’m struggling to make ends meet with costs going up like this,” said Liu, a native of Sichuan province who pays his workers as much as 1,800 yuan ($271) a month, or 88 percent more than the Beijing minimum wage, to serve up a staple Chinese meal. “Raising prices is the only way out,” he said, predicting he won’t be able to hold out beyond two months.

Premier Wen Jiabao’s cabinet last week announced it will sell grain, cooking-oil and sugar reserves, ordered an end to tolls on trucks carrying produce and threatened price controls to rein in a 10 percent inflation rate for food. Because the measures would do nothing to counter the 54 percent surge in money supply over the past two years, the risk is they will prove insufficient to cope with the challenge.

“They are just not addressing the fundamental problem at all,” said Patrick Chovanec, an associate professor at Beijing’s Tsinghua University. With the expansion of credit and cash in the economy stemming from China’s response to the global crisis, “you’re sitting on a volcano,” said Chovanec.

The People’s Bank of China has raised its benchmark interest rates once this year, lagging behind Malaysia, Thailand, Taiwan and South Korea as emerging Asian economies led the global economic rebound. Policy makers have instead relied on guidance to banks to scale back lending and on increases in reserve ratios, with the PBOC announcing the fifth boost of the year four days ago.

The Shanghai Composite Index tumbled 1.9 percent to 2,828.28 at today’s close, extending the benchmark’s biggest two-week slide since May, sparked by concern that accelerated monetary tightening will crimp economic growth.

China’s plans to rein in prices include selling state food reserves, stabilizing the cost of natural gas and cracking down on speculation in and hoarding of agricultural products, the State Council said. The aim is to damp food inflation that reached 10 percent in October, more than twice the 4.4 percent headline rate.

Standard Chartered Plc economists anticipate the consumer price index will rise by an average of 5.5 percent next year, with a peak gain of 6.3 percent in June. The bank estimates this year’s increase at 3.2 percent. That compares with a 0.7 percent decline in 2009.

China will sell soybeans and vegetable oil from its stockpiles starting this week to stabilize prices, the State Administration of Grain said in a statement Nov. 19. State news agency Xinhua reported the next day that the cabinet ordered local governments to ensure food supplies ban toll collections for vehicles carrying fresh foods.

The People’s Daily, a newspaper published by the Communist party, called on the government to expand the number of commodities for which reserves are kept. The quantities of and distributions from existing stockpiles should also be increased, the paper said in an editorial on its front page today.

Chinese corn, sugar and rice futures have reached records in the past two weeks on concern supplies may lag behind demand.

The State Council meeting last week came amid concern at the threat increased food costs pose to the poorest people in the world’s most populous nation. More than 81 million people in disaster-affected parts of China may need food assistance from the government this winter, the Ministry of Civil Affairs said on its website on Nov. 18.

At a food market in Beijing’s Deshengmennei Avenue, fruit- stand owner Wang Yanling says sales of apples have slumped from as much as 250 kilograms (551 pounds) a day a year ago to about 100 kilograms a day after prices soared more than 60 percent.

“People are buying less with prices jumping up,” said Wang. “It’s getting harder and harder to sell.”

McDonald’s Corp., the world’s largest restaurant chain, said Nov 17. that it increased prices for its burgers, drinks and snacks in China to offset costs.

A slowing pace of economic growth may prove helpful in damping down inflation. China’s gross domestic product expanded 9.6 percent in the third quarter from a year before, down from 10.3 percent in the previous three months and 11.9 percent in January to March.

China also is grappling with inflows of cash sparked by monetary easing abroad, bets on yuan gains and a trade surplus that surged last month to $27 billion. Officials have faulted the U.S. Federal Reserve’s plan to buy $600 billion of Treasury securities for contributing to asset-price pressures in Asia.

“Quantitative easing in the U.S. puts China’s seat to the fire because it forces more inflationary pressure onto them,” said Diana Choyleva, a Hong Kong-based economist at Lombard Street Research Asia. “They cannot avoid what they need to do,” which is raise rates or let the yuan strengthen, she said.

Policy makers have limited the currency’s appreciation to less than 3 percent since scrapping in June an almost two-year crisis policy of keeping the yuan level with the dollar to protect the nation’s exporters. It was at 6.6449 as of 12:32 p.m. Hong Kong time.

The PBOC will raise the benchmark one-year deposit and lending rates by year-end, from the current levels of 5.56 percent and 2.5 percent, according to a Bloomberg News survey of nine economists last week.

China’s biggest banks are approaching annual lending quotas and plan to stop expanding their loan books to avoid exceeding the limits, according to four people with knowledge of the matter. Industrial & Commercial Bank of China Ltd., Bank of China Ltd. and Agricultural Bank of China Ltd. are only extending new loans as existing ones get repaid, the people said, speaking on condition of anonymity.

While price controls may help with inflation expectations, they will either be ineffective because producers circumvent them or create shortages if suppliers suffer losses and are not compensated, said Goldman Sachs Group Inc. economists Yu Song and Helen Qiao in a Nov. 17 note.

“Prices for everything are rising every day — no exception,” said Zhu Fulong, 35, who has run a grocery shop in Hangzhou, a city near Shanghai, with his wife since 2006. “A lot of people won’t increase their spending much, so they instead choose products at lower grade which we sell at thinner margins, and that’s hurting our business.”

Rising prices are also prompting housewives like Lily Huang, 50, to travel once a month to Hong Kong from Shenzhen in southern China to stock up on items including toothpaste, shampoo and tissues.

“Things are much cheaper here,” said Huang, carrying a suitcase and three bags full of groceries at Sheung Shui train station next to Hong Kong’s border with China. A packet of Tempo tissues is 30 percent cheaper in Hong Kong, she said. “It’s really worth the trouble for us to come here to shop.”