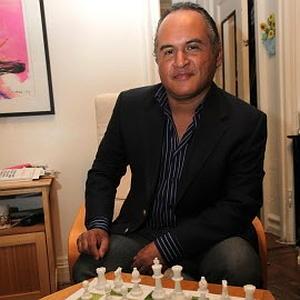 ROOKED: Junior Mendoza says cops only “should have given us a warning.”

Drop that bishop and come out with your hands up!

A squad of cops in bulletproof vests swooped into an upper Manhattan park and charged seven men with the “crime” of playing chess in an area off-limits to adults unaccompanied by kids — even though no youngsters were there.

“Is chess really something that should be considered a threat to the neighborhood?” Inwood resident and mom Joanne Johnson wrote Mayor Bloomberg, the City Council and Police Commissioner Ray Kelly after the raid.

“This incident is an embarrassment to the officers from the 34th Precinct who felt that it was necessary to use their badge and authority to issue such a random summons.”

The chess tables where they were ticketed for “failure to comply with signs” are in a fenced-in area where posted notices read: “Adults allowed in playground areas only when accompanied by a child under the age of 12.”

Police said the rule protects kids from pedophiles or others who might want to harm them.

A police source added, “It’s the broken windows theory . . . small things can turn into bigger things. Some citizens may see it as police harassment, but God forbid something happens to a child, people would be complaining, Why didn’t the police enforce these rules? That’s what they would be griping about.”

Yacahuda “Y.A.” Harrison, 49, one of those chess aficionados, said he saw those signs months ago and “asked the [Parks] ranger if we had permission to be there.”

“The ranger said, ‘Oh no, that’s fine, that’s only written for pedophiles.’ “

Since then, he said, parents have welcomed him and the other players — and even had their kids take chess lessons from them.

“The day we got picked up, there were no kids” in the playground, he said. “They treated us like drug dealers. All we were doing was playing chess.”

Harrison, like the others, must appear in Manhattan Criminal Court on Dec. 28 for the Oct. 20 incident.

Another man ticketed that day, Inwood resident and artist Junior “Chiqui” Mendoza, 46, said that the police “should have given us a warning, and not a ticket.”

Margaret Blachly, a teacher who took her students to the park yesterday, said, “There are often a lot of rules in this park that get broken, and no summonses are issued.

“If the tables are there to play chess, that’s what they should be allowed to do.”

But Parks Department First Deputy Commissioner Liam Kavanagh said the rule is “designed to protect children using our playgrounds and to deter inappropriate adult use of space designated specifically for children.”

NYPD spokesman Paul Browne said, “Police acted appropriately in issuing criminal summonses last month to men in a section of Inwood Hill Park restricted to children with their parents or other minders.

“The precinct conditions team responded to community complaints about drinking, drug use and other problems, including violations of Park Department regulations designed to protect children. One of men had priors for reckless endangerment, grand larceny, drug possession, and criminal mischief.”