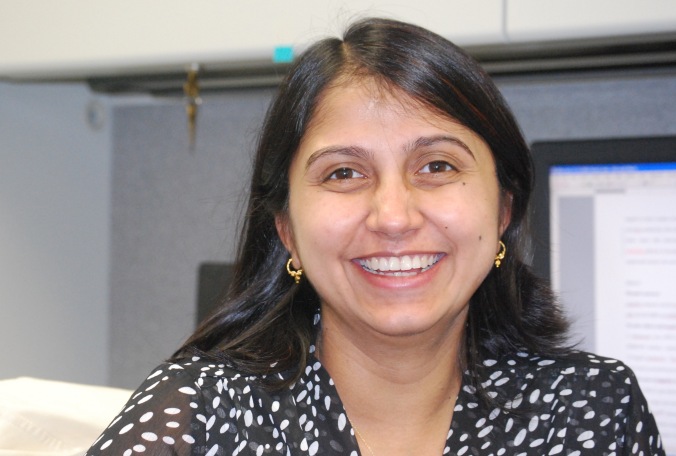 TEMPLE TERRACE – A University of South Florida researcher stumbled out of her hotel room Monday night and told two guests she had ingested cyanide, police said.

Chitra Chauhan, 33, wife and mother of a 3-year-old, was pronounced dead at a hospital about two hours later, victim of an apparent suicide. A small amount of potassium cyanide was found on a table in her room.

The nature of Chauhan’s work and the manner of her death turned what investigators characterized as a private act into a public spectacle.

About 9:30 p.m., Temple Terrace fire officials evacuated the 75 people in the Extended Stay America hotel and later conducted health examinations of any responders who were called to the vicinity.

Guests were sent to other hotels until the next morning while a hazardous materials contractor sanitized the area.

“We do know obviously it can be potentially very dangerous and deadly,” said Mike Dunn, Temple Terrace police spokesman.

Potassium cyanide is commonly used by universities in teaching chemistry and conducting research, but not in Chauhan’s work. The school is reviewing how Chauhan obtained the chemical and is cooperating with police in their investigation.

Chauhan worked in the USF Center for Biological Defense and Global Health Infectious Disease Research, which is housed at the USF Research Park on the south end of campus. The center was created after the Sept. 11, 2001, terrorist attacks to study bioterrorism and emerging infections.

Security is tighter throughout the research park because work is done there with private companies and the Department of Defense.

A counselor was made available Tuesday to people who worked with Chauhan, said Paula Knaus, assistant dean in the USF College of Public Health.

“To help them and let them talk,” Knaus said Tuesday at the park. “They’re all in shock.”

Chauhan was investigating treatments for tropical diseases common around the world, including malaria, USF said.

Since Jan. 1, 2000, 111 cases of cyanide exposure have been reported in Florida. Seven ended in death, three of them suicides.

“Most people don’t have easy access to cyanide-type chemicals,” Lewis-Younger said. “We typically see people try to commit suicide with pharmaceuticals, what they have at hand.”

Cyanide kills by interfering with the body’s ability to use oxygen. People exposed to high levels of the poison might die within minutes, Lewis-Younger said. Symptoms of exposure might include dizziness, shortness of breath and chest pain.

Cyanide is used in manufacturing, and as a gas, to kill pests. It can give off a signature bitter-almond smell.

Chauhan has worked at USF as a post-doctoral researcher since Dec. 26, 2007. Her annual salary was $45,183. Police gave her address as a condominium on Palm Springs Boulevard in Tampa Palms.

She obtained a doctorate degree in 2005 from the Institute of Genomics and Integrative Biology in New Delhi, India. She went to the University of Notre Dame in Indiana to join her husband, who had taken a faculty position there after finishing graduate school, said Professor Dave Severson, who runs the lab where she worked.

The lab studied how mosquitoes transmit diseases, and Chauhan focused on the transmission of dengue fever.

“She was our colleague. She was our friend. I’m devastated. Everyone in the lab will be crushed” to learn of her death.

She and her husband, Bharath Balu, came to USF together. The couple published several papers together, though they worked in different labs.

USF said it would notify the community about public memorial services.

Reporters Jeff Patterson and Howard Altman contributed to this report.