In the Israeli city of Safed, an 89-year-old man has been accused of treachery for welcoming Arab students. 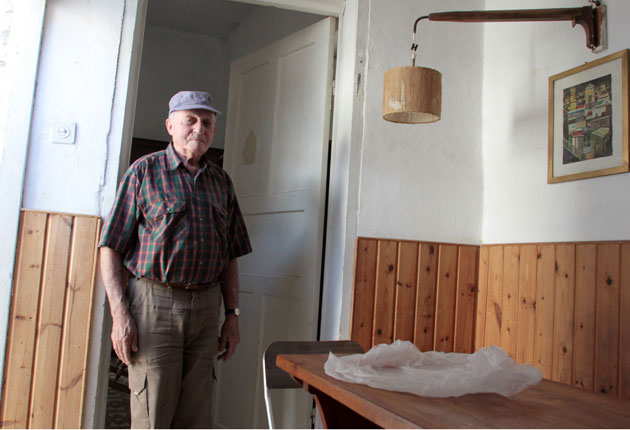 First they threatened to burn his house down. Then they pinned leaflets to his front door, denouncing him as a Jewish traitor. But Eli Tzavieli, an 89-year-old Holocaust survivor, is defiant. His only “crime” is to rent out his rooms to three Arab students attending the college in Safed, a religious city in northern Israel that was until recently more famous for Jewish mysticism and Madonna.

A campaign waged by Shmuel Eliyahu, the town’s radical head rabbi, culminating in a ruling barring residents from renting rooms to Israeli Arabs, means that Safed is fast emerging as a byword for racism.

“I’m not looking for trouble, but if there is a problem, I’ll confront it,” says Mr Tzavieli, a Jew who survived Nazi forced labour camps and whose parents perished in Auschwitz. “These [tenants] are great kids. And I’m doing my best to make them comfortable.”

At an emergency meeting last month, Mr Eliyahu, the son of a former chief rabbi of Israel, was joined by 17 other religious leaders in warning that the city’s 40,000 Jewish residents were threatened with an “Arab takeover.”

The declaration appeared to trigger a campaign of harassment against Mr Tsavieli to pressure him into throwing the students out. When the pensioner paid little heed to his aggressors, he received an anonymous threat to set fire to his house and a vicious poster campaign accused him of “returning the Arabs to Safed.”

Mr Eliyahu, who once advocated the mass slaughter of Palestinians civilians in Gaza to stop the firing of Qassam rockets, declined to be interviewed for this story.

Sprawled over a hilltop in the Upper Galilee, Safed is one of Israel’s most picturesque towns, enjoying commanding views over the north of the country. A leading centre for Kabbalah, or Jewish mysticism, it is one of Judaism’s four holiest towns, and every year draws a diverse celebrity crowd.

After Israel’s founding, some Palestinians accepted Israeli citizenship and remained in Israel, and now number 1.5 million, a fifth of the country’s population.

These days, Safed is home to a large community of ultra-orthodox Jews, who are deeply conservative and observe a strict code of behaviour, including no driving or smoking in public on Shabbat, the Jewish Sabbath.

As Mr Tsavieli poses for a photograph outside the entrance to his home in Safed’s Old City, a Jewish labourer shouts at him: “I’m warning you, it won’t do you any good to attract attention like this.”

The pensioner continues to smile, but it’s clear that he’s a little rattled. Sitting in his leafy courtyard, he talks about his extensive voluntary and social work, including time as a probation officer (“The moment you have a problem, Eli, you just let us know,” a former inmate told him after hearing of the threats), and says that he’s only trying to do “a good thing.”

As he talks, Nimran Grefat, one of his Arab tenants, dashes in to pick up some books for his next class, stopping briefly to chat. “He’s a good man, he’s like a father to us,” Mr Grefat, 19, says later of his landlord. “He told us: ‘If someone hurts you, he hurts me.'”

Tension in the city ratcheted up a notch last month after a violent clash between a Jewish mob and Arab students. Thirty or so Jewish youths converged on a building rented to Arab students, throwing bottles and chanting “stinky Muslims” and “death to Arabs.” The students retaliated by throwing stones, prompting an Israeli policeman to loose off rounds from his rifle. He was later charged along with a friend for firing live rounds.

Mr Grefat says that he is afraid, and even considered dropping his studies or moving into dorms. Encouraged by Mr Tsavieli to stick it out, he takes basic safety precautions, such as not returning home alone late at night. “I didn’t come here to live,” he says. “I’m not going to build a family here. I just came for three years to study, after which I’ll go back to my village.”

The tensions that many hoped were confined to Safed are spreading to other towns, too. The deputy mayor of Carmiel, a mere 30 kilometres from Safed, was recently sacked for anti-Arab statements and for employing a militia to prevent Arabs from entering the city.

Many civil rights defenders have warned that the events in Israel’s north are not an isolated phenomenon, but rather a symptom of the growing racism and anti-Arab sentiment sparked by a political shift to the right in recent years.

“The government should be mitigating these tensions, but instead it is escalating them with new laws and a vacuum of decisions,” said Ali Haider, a director at Sikkuy, an Israeli organisation committed to civic equality.

Several bills currently making their way through the Knesset have been slammed by liberal commentators as racist or anti-Arab, including a loyalty bill requiring new citizens to swear allegiance to a “Jewish and democratic” Israel. Moreover, small Jewish communities are lobbying to determine just who can and cannot move into their communities, a demand widely interpreted as a move to keep Arabs out.

Israel’s firebrand Foreign Minister, Avigdor Lieberman, has even proposed a population transfer in the event of a peace agreement that would see Israel’s Arab citizens placed under Palestinian sovereignty.

These proposals have drawn a barrage of criticism from the left of the political spectrum, but observers say such ideas are moving into the mainstream, as evidenced by robust support for Mr Lieberman and his ultra-nationalist party, Yisrael Beitenu, Israel’s third-largest party. Several Israeli commentators have sounded a note of alarm at exclusionary moves, warning that the prevailing trends in Israel are beginning to resemble Nazi-era policies.

“In other countries, in other eras, the selling and renting of homes to Jews was forbidden, and those who violated the ban were penalised harshly. We all remember where it ended up,” wrote Ziv Lenchner in an op-ed on Israeli news site Ynet. “Well, do we really remember?”

But that argument cuts little ice in Safed, where many residents feel the 1,350 Arabs studying at the nearby college are an unsettling influence that threatens Safed’s religious and Jewish character, not least because of fears of intermarriage.

“I see the Arabs here wearing gold chains, and it looks like Syria,” says a young woman, who wears a modest headscarf to cover her hair. “This is an orthodox city, and [that] is impure.”

A new medical school is to open in the area early next year, prompting concerns among Jews that it will bring even more Arabs to the town.

Moshe, 35, a music store manager, insists the issue is not one of racism, but that encouraging a large influx of Arabs into the city demonstrates a “blatant disregard” for the existing Jewish community. “Our experience of Arabs over the last 10 years is terror,” he said. “Now they’re saying, ‘Let us be neighbours.’ You don’t force peace on people.”

4 thoughts on “Holocaust survivor Eli Tzavieli’s life is in danger again, being denounced as Jewish traitor for welcoming Arab students”