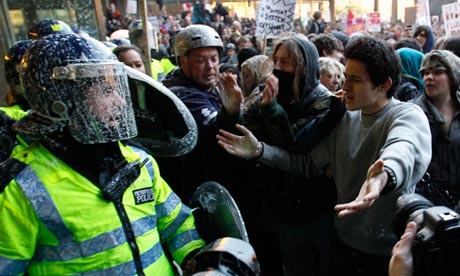 Scotland Yard has forced the closure of an anti-police blog which was being used to disseminate advice to protesters pictured at the student fees demonstration.

The website Fitwatch was suspended after the its hosting company received contact from C011, the Metropolitan’s public order branch, stating that the blog was “being used to undertake criminal activities”.

The move appears to have taken place after a blog posted on the website gave guidance to students who feared they might be arrested for their involvement in the occupation of the Millbank office complex, which houses the Tory party headquarters.

A largely peaceful march against the proposed increase in tuition fees turned violent on Wednesday when a minority of the 50,000 students targeted Millbank.

Around 200 entered the building and some accessed the roof. During a period of rioting, windows and furniture were smashed and, in the most serious act of violence, a fire extinguisher was thrown towards police from the roof.

The Fitwatch blogpost, which last night had reappeared on several other websites, recommended that students “get rid” of clothes they wore at the demonstration and change their appearance.

“Perhaps now is a good time for a makeover,” said the post. “Get a haircut and colour, grow a beard, wear glasses. It isn’t a guarantee, but may help throw them off the scent.”

Hours later, the Met’s “e-crime unit” informed Fitwatch’s website hosting service – JustHost.com – that the blog was being used to attempt to pervert the course of justice by providing guidance to “offenders”.

“We hereby request [you] de-host this website for a minimum period of 12 months,” it said in a letter seen by the Guardian. “The website is providing explicit advice to offenders following a major demonstration in central London.

“The demonstration was marred by violence and several subjects have already been arrested, with a major police operation under way to identify and arrest further offenders.”

The letter stated that authority to close “the website and IP address” had been given by Will Hodgeson, an acting detective inspector at C011.

The Telegraph and the rightwing blogger Guido Fawkes both launched campaigns last week to identify student protesters, posting photographs of activists they suggested had been involved in criminal activity.

Criticising the campaign as “an irresponsible and frenzied ‘shop-a-student'” initiative, Fitwatch yesterday issued its own advice to students who might be “worried” that they would become suspects because of their involvement in the demonstration.

The guidance ranged from suggesting that students contact a lawyer or stay away from demonstrations for a while, to advising them to get rid of clothes they were wearing at the protests, as well as spray cans and “dodgy texts/photos on your phone”.

The post added: “The police often use the psychological pressure of knowing they have your picture to persuade you to ‘come forward’. Unless you have a very pressing reason to do otherwise, let them come and find you, if they know who you are.”

Fitwatch was set up in 2007 by protesters seeking to oppose what they saw as objectionable surveillance tactics used by Forward Intelligence Teams (FITs), who use cameras to monitor political activists.

The site has proved controversial among public order police officers, who found their own names, badge numbers and photos uploaded on the internet as an act of retaliation.

The Fitwatch website was hosted by Emily Apple, 34, who said last night that closure amounted to “political intimidation”. “It seems convenient that they have taken it down now,” she said, referring to recent anti-police blogposts on the site.

“Nothing in that post [giving guidance to student protesters] has not been said before on our blog or on other sites.”

Val Swain, 44, another Fitwatch campaigner, said the post had been been a direct response to what she called the Telegraph’s “rogues’ gallery” and was never intended to divulge information that was not already “well known”.

She added: “It was tantamount in my view to a lawyer saying to their client: you can say ‘no comment’ in the police interview.”