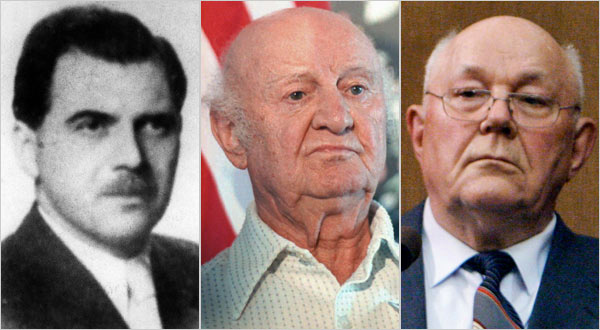 WASHINGTON — A secret history of the United States government’s Nazi-hunting operation concludes that American intelligence officials created a “safe haven” in the United States for Nazis and their collaborators after World War II, and it details decades of clashes, often hidden, with other nations over war criminals here and abroad.

The 600-page report, which the Justice Department has tried to keep secret for four years, provides new evidence about more than two dozen of the most notorious Nazi cases of the last three decades.

It describes the government’s posthumous pursuit of Dr. Josef Mengele, the so-called Angel of Death at Auschwitz, part of whose scalp was kept in a Justice Department official’s drawer; the vigilante killing of a former Waffen SS soldier in New Jersey; and the government’s mistaken identification of the Treblinka concentration camp guard known as Ivan the Terrible.

The report catalogs both the successes and failures of the band of lawyers, historians and investigators at the Justice Department’s Office of Special Investigations, which was created in 1979 to deport Nazis.

Perhaps the report’s most damning disclosures come in assessing the Central Intelligence Agency’s involvement with Nazi émigrés. Scholars and previous government reports had acknowledged the C.I.A.’s use of Nazis for postwar intelligence purposes. But this report goes further in documenting the level of American complicity and deception in such operations.

The Justice Department report, describing what it calls “the government’s collaboration with persecutors,” says that O.S.I investigators learned that some of the Nazis “were indeed knowingly granted entry” to the United States, even though government officials were aware of their pasts. “America, which prided itself on being a safe haven for the persecuted, became — in some small measure — a safe haven for persecutors as well,” it said.

The report also documents divisions within the government over the effort and the legal pitfalls in relying on testimony from Holocaust survivors that was decades old. The report also concluded that the number of Nazis who made it into the United States was almost certainly much smaller than 10,000, the figure widely cited by government officials.

The Justice Department has resisted making the report public since 2006. Under the threat of a lawsuit, it turned over a heavily redacted version last month to a private research group, the National Security Archive, but even then many of the most legally and diplomatically sensitive portions were omitted. A complete version was obtained by The New York Times.

The Justice Department said the report, the product of six years of work, was never formally completed and did not represent its official findings. It cited “numerous factual errors and omissions,” but declined to say what they were.

More than 300 Nazi persecutors have been deported, stripped of citizenship or blocked from entering the United States since the creation of the O.S.I., which was merged with another unit this year.

In chronicling the cases of Nazis who were aided by American intelligence officials, the report cites help that C.I.A. officials provided in 1954 to Otto Von Bolschwing, an associate of Adolf Eichmann who had helped develop the initial plans “to purge Germany of the Jews” and who later worked for the C.I.A. in the United States. In a chain of memos, C.I.A. officials debated what to do if Von Bolschwing were confronted about his past — whether to deny any Nazi affiliation or “explain it away on the basis of extenuating circumstances,” the report said.

The Justice Department, after learning of Von Bolschwing’s Nazi ties, sought to deport him in 1981. He died that year at age 72.

The report also examines the case of Arthur L. Rudolph, a Nazi scientist who ran the Mittelwerk munitions factory. He was brought to the United States in 1945 for his rocket-making expertise under Operation Paperclip, an American program that recruited scientists who had worked in Nazi Germany. (Rudolph has been honored by NASA and is credited as the father of the Saturn V rocket.)

The report cites a 1949 memo from the Justice Department’s No. 2 official urging immigration officers to let Rudolph back in the country after a stay in Mexico, saying that a failure to do so “would be to the detriment of the national interest.”

Justice Department investigators later found evidence that Rudolph was much more actively involved in exploiting slave laborers at Mittelwerk than he or American intelligence officials had acknowledged, the report says.

Some intelligence officials objected when the Justice Department sought to deport him in 1983, but the O.S.I. considered the deportation of someone of Rudolph’s prominence as an affirmation of “the depth of the government’s commitment to the Nazi prosecution program,” according to internal memos.

The Justice Department itself sometimes concealed what American officials knew about Nazis in this country, the report found.

In 1980, prosecutors filed a motion that “misstated the facts” in asserting that checks of C.I.A. and F.B.I. records revealed no information on the Nazi past of Tscherim Soobzokov, a former Waffen SS soldier. In fact, the report said, the Justice Department “knew that Soobzokov had advised the C.I.A. of his SS connection after he arrived in the United States.”

(After the case was dismissed, radical Jewish groups urged violence against Mr. Soobzokov, and he was killed in 1985 by a bomb at his home in Paterson, N.J. )

The Nazi-hunting report was the brainchild of Mark Richard, a senior Justice Department lawyer. In 1999, he persuaded Attorney General Janet Reno to begin a detailed look at what he saw as a critical piece of history, and he assigned a career prosecutor, Judith Feigin, to the job. After Mr. Richard edited the final version in 2006, he urged senior officials to make it public but was rebuffed, colleagues said.

When Mr. Richard became ill with cancer, he told a gathering of friends and family that the report’s publication was one of three things he hoped to see before he died, the colleagues said. He died in June 2009, and Attorney General Eric H. Holder Jr. spoke at his funeral.

“I spoke to him the week before he died, and he was still trying to get it released,” Ms. Feigin said. “It broke his heart.”

After Mr. Richard’s death, David Sobel, a Washington lawyer, and the National Security Archive sued for the report’s release under the Freedom of Information Act.

The Justice Department initially fought the lawsuit, but finally gave Mr. Sobel a partial copy — with more than 1,000 passages and references deleted based on exemptions for privacy and internal deliberations.

Laura Sweeney, a Justice Department spokeswoman, said the department is committed to transparency, and that redactions are made by experienced lawyers.

The full report disclosed that the Justice Department found “a smoking gun” in 1997 establishing with “definitive proof” that Switzerland had bought gold from the Nazis that had been taken from Jewish victims of the Holocaust. But these references are deleted, as are disputes between the Justice and State Departments over Switzerland’s culpability in the months leading up to a major report on the issue.

Another section describes as “a hideous failure” a series of meetings in 2000 that United States officials held with Latvian officials to pressure them to pursue suspected Nazis. That passage is also deleted.

So too are references to macabre but little-known bits of history, including how a director of the O.S.I. kept a piece of scalp that was thought to belong to Dr. Mengele in his desk in hopes that it would help establish whether he was dead.

The chapter on Dr. Mengele, one of the most notorious Nazis to escape prosecution, details the O.S.I.’s elaborate efforts in the mid-1980s to determine whether he had fled to the United States and might still be alive.

It describes how investigators used letters and diaries apparently written by Dr. Mengele in the 1970s, along with German dental records and Munich phone books, to follow his trail.

After the development of DNA tests, the piece of scalp, which had been turned over by the Brazilian authorities, proved to be a critical piece of evidence in establishing that Dr. Mengele had fled to Brazil and had died there in about 1979 without ever entering the United States, the report said. The edited report deletes references to Dr. Mengele’s scalp on privacy grounds.

Even documents that have long been available to the public are omitted, including court decisions, Congressional testimony and front-page newspaper articles from the 1970s.

A chapter on the O.S.I.’s most publicized failure — the case against John Demjanjuk, a retired American autoworker who was mistakenly identified as Treblinka’s Ivan the Terrible — deletes dozens of details, including part of a 1993 ruling by the United States Court of Appeals for the Sixth Circuit that raised ethics accusations against Justice Department officials.

That section also omits a passage disclosing that Latvian émigrés sympathetic to Mr. Demjanjuk secretly arranged for the O.S.I.’s trash to be delivered to them each day from 1985 to 1987. The émigrés rifled through the garbage to find classified documents that could help Mr. Demjanjuk, who is currently standing trial in Munich on separate war crimes charges.

Ms. Feigin said she was baffled by the Justice Department’s attempt to keep a central part of its history secret for so long. “It’s an amazing story,” she said, “that needs to be told.”