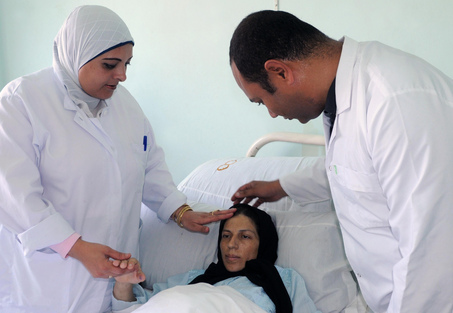 Egypt’s spiralling threat of hepatitis C virus – already the highest incidence rate in the world — is alarming researchers who fear a potential epidemic of the blood-borne disease could spread across the most populous Arab country.

The findings of a recent study published in the National Academy of Sciences showed that more than 500,000 new HCV infection cases occur in Egypt every year. Much of the problem behind the soaring infectious rates is poor healthcare oversight and erratic medical hygiene.

“Nearly seven out of every 1,000 Egyptians acquire HCV infections every year. This is the highest level of HCV transmission ever recorded at a national level for a disease transmitted by use of non-sterile medical instruments,” says Dr. F. DeWolfe Miller, lead author of the study.

Prevalence of hepatitis C in Egypt dates back to the 1970s. It was then that health authorities in the Nile Delta and Upper Egypt were injecting patients with tartar emetic to stop the spread of the water-borne disease known as Bilharzia. But many of the needles were unsterilized, causing HCV to spread to thousands of Egyptians.

Nowadays, many blame the government for not halting the virus’ proliferation throughout the country of about 80 million people. The Egyptian National Committee on Viral Hepatitis states that 9.8% of Egyptians are HCV infected, whereas doctors and researchers claim that the real figure is between 15% and 20%.

“Most virus C patients come from Egypt’s most rural and poorest areas and they rely on the medical insurance programs,” said Dr. Lotfi Wanees, an expert on hepatitis. “Medication cost for every hepatitis C patient stands at an average of 70,000 Pounds [$12,250] and the government has failed to provide this sum for most of the patients.”

He added: “There are also the deals signed between the Ministry of Health and medicine companies. Many virus C medicines produced by Egyptian pharmaceutical firms are not verified in the West and proved to be inefficient. But they are still being prescribed to patients and the government pays millions of pounds to purchase them.”

According to Wanees, the “community acquired” virus has also been accompanied by culture and literacy problems, as many of the poor, uninsured patients resort to superstitious and primitive medical substitutes, which worsen their cases.

Complications of hepatitis C lead to liver cirrhosis or liver failure. Many people infected with the virus have no symptoms and are only diagnosed when liver damage appears many years later.